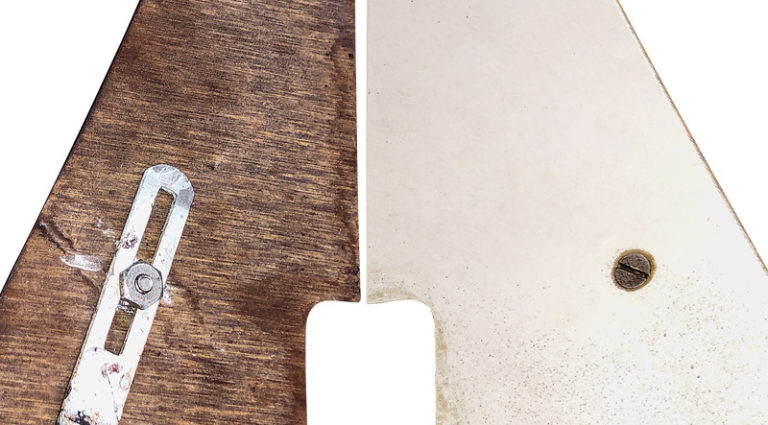 I’ve just completed restoring a very early Les Paul that was horribly damaged and poorly repaired, then painted black! I’m about to put it together, and am wondering if what I thought were a home-made replacement pickguard and jack plate could have been from the factory on the early models? They’re made from white Formica, and are so well-made I doubt an inexperienced person could have done the work; certainly, a router template would have been made for the pickguard.

The International Resistive Company (IRC) pot codes in the guitar date to the 18th week of 1952, so they were made in late April or early May. Les debuted the guitar live that June, so I wonder if Gibson used Formica, as they might not have yet been producing the cream guards. Have you ever seen an early Les Paul with a Formica pickguard and jack plate? – Dan Erlewine
We have not seen this before. However, being an early example of the Les Paul, it is certainly possible. To the best of our knowledge, Gibson was not using cream-colored plastic parts on any other model at that time, so perhaps they sent someone to a Kalamazoo hardware store to purchase Formica for a pickguard and jack plate as a temporary stop-gap.

I have a black ’87 Gibson Les Paul Standard with no dot over the letter “i” in the Gibson logo. The tulip tuners have a green tinge, the strap buttons are black, and the jack plate is metal. Are these normal for its era, or maybe variances due to Norlin selling Gibson at that time? – Tom Hord
The missing dot occurs from time to time, likely because of a production error. The mother-of-pearl inlay is installed prior to the peghead overlay being painted black. It was then standard procedure to scrape the black paint off of the pearl, but sometimes this step was missed. We’ve seen examples of unscraped peghead inlay as far back as the 1920s and ’30s.
The green tinge on the tuner buttons and the metal output-jack plate are normal for that model and time period. The black strap buttons are likely aftermarket replacements.

This column addresses questions about features and model changes on stringed instruments, information on manufacturers, driving forces in the marketplace, the effects of technology on music, and any other related subject. Questions can be sent to vguitar@vintageguitar.com with “Gruhn Q&A” in the subject line.

George Gruhn has been part of the Nashville music scene for more than 50 years. He moved to Nashville in 1969 after getting his Bachelor’s Degree from the University of Chicago and doing graduate work at Duke University and the University of Tennessee in Knoxville. In 1970, he established Gruhn Guitars, Inc., one of the largest dealers of vintage and used instruments in the world.