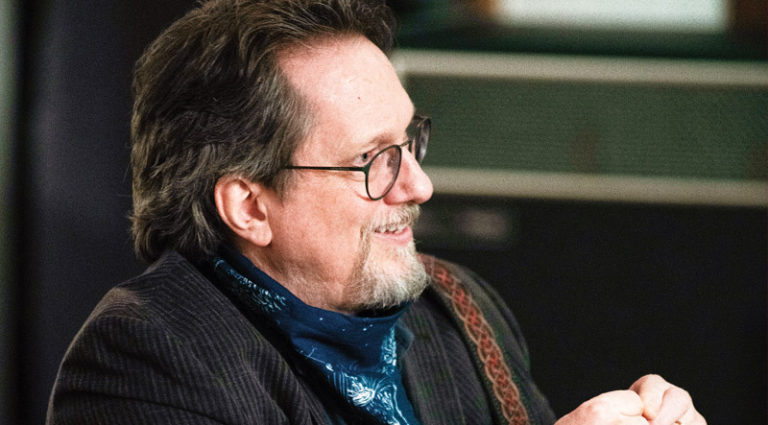 In April of 2020, Jerry Douglas and his band were set to back singer/songwriter John Hiatt on his new album, Leftover Feelings, then play a joint tour. The pandemic, of course, delayed everything for a year.

Hiatt has worked with great slide players in the past, including Sonny Landreth and Ry Cooder. Douglas enjoyed falling into that groove with him, and the experience was heightened by using Douglas’ band – guitarist Mike Seal, fiddler Christian Sedelmyer, and upright bassist Daniel Kimbro.

Hiatt’s voice, Douglas says, “…is a character in his life. He’s like Willie Nelson or Tom Waits. You know who it is immediately. The thing I want to do when I’m playing with a singer is to keep them front and center. You style your backup line to accentuate what they say and keep the light on them.”

As accompanists, the band shares that goal. On the rockabilly flavored “Long Black Cadillac,” they created aggressive rhythmic backing.

“I’ve been asked several times, ‘Who’s playin’ drums?’ But there aren’t any,” said Douglas, who also produced the album.

Seal provided particular empathy on the somber “Light of the Burning Sun,” which is based on a tragedy involving Hiatt’s oldest brother.

“There’s one place where the policeman tells his mother what’s happened,” Douglas explains. “I don’t know where Mike got this, but it sounds like the bottom dropped out. It just framed it so perfectly.”

For the ballad “Buddy Boy,” Douglas created a string-quartet feel with Kimbro and Sedelmyer. He used his Jason DuMont Rodeo lap steel through an amp on “I’m in Asheville.” “It sounds like another string part, because it’s got the sustain,” he noted. “I keep vibrato to a minimum.”

Recording at RCA Studio B, site of historic recordings by Elvis Presley, Chet Atkins, the Everly Brothers, Dolly Parton, Waylon Jennings, and Willie Nelson added to everyone’s enthusiasm. Douglas had jammed there with Atkins in the distant past.

“The room has its own sound. It’s got a tile floor and that funky acoustic tile on the ceiling and in the walls. But much of the sound comes from that floor; you can’t get rid of it, so you have to make it your friend and use it to your advantage. We cut it all live. It’s really hard to do any kind of overdub in that room because it’s so live.”

Hiatt’s vocal and guitar were separately miked, but the vocal mic picked up ample guitar.
“We couldn’t overdub vocals because we’d have to do the guitar at the same time.”

Douglas says Hiatt is a solid rhythm player who accompanied himself with two vintage banner-logo Gibson J-45s. “One’s just a little bit brighter than the other, but they’re great because they ride on top of all the low-end [from] the band. They have a lot of upper-mids that keep everything clean. That’s why the bass is so clear.”

On the album, the producer played his Jerry Douglas Blackbeard resophonic, the culmination of 15 years collaborating with luthier Paul Beard. “I told him that the first real Dobro I ever saw was black and had a red fretboard. He said, “Nobody will want a red fretboard.’ I said, ‘Just humor me. Build me one.’ And now it’s the biggest selling guitar he has.”

A Lollar foil pickup occupies the neck position. Both the Blackbeard and DuMont have Hipshot DoubleShot tailpieces that allow him to switch from G to D tunings.

Onstage, he carries a series of pedals and runs the pickup through a signature-model Fishman Aura with 16 microphone image settings; his favorite emulates the classic RCA 77 ribbon mic. When playing with amplified instruments and drums, he adds, “I’ll go to a brighter microphone (image) like a Neumann U-67.”

With covid in the rearview, Douglas and his band look forward to touring with Hiatt.

“You don’t know a song when you’re recording it,” he reflects. “You learn it later. The record’s good and it sounds great, but it’s going to sound better when we get to know it and get out on the road and play it a few times in front of people. That’s when it really comes to life.”