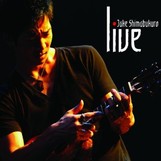 In his introduction to “While My Guitar Gently Weeps,” Shimabukuro explains how a video of him playing the George Harrison classic in Central Park, for New York’s Midnight Ukulele Disco, “changed my life.” That’s an understatement. With more than a million views on youtube and other internet sites, it catapulted him to the top of Billboard‘s World Music chart and to stages playing with Bela Fleck, Jimmy Buffett, and Tommy Emmanuel.

It also changed the way people viewed the ukulele, proving that the lowly four-string was capable of more than “Tiptoe Through The Tulips.” Much more.

From the single-note lines of “Trapped,” which opens this CD, to the complex, powerful rhythms achieved on “Gently Weeps,” Shimabukuro sounds less like he’s playing a ukulele and more like he’s playing a guitar – that is, if the guitar were played by, say, Michael Hedges.

Compiled from many solo performances here and overseas, the set bounces from jazz (Chick Corea’s “Spain”) to classical (Bach’s Two-Part Invention No. 4 In D Minor) to folk (the traditional Japanese koto tune “Sakura Sakura”) to pop (a very interesting version of the Michael Jackson hit “Thriller”) without ever once sounding gimmicky. And his originals – like the catchy melody and impressive percussion break on “Me & Shirley T.” – don’t take a backseat. In fact, his “Let’s Dance,” with its pyrotechnic prelude, and “Wes On Four” (assumedly a nod to Mr. Montgomery) hold their own alongside the more familiar covers.

Except for “While My Guitar Gently Weeps,” of course. That’s one even Jake will have a hard time topping any time soon.

This article originally appeared in VG‘s Jul. ’09 issue. All copyrights are by the author and Vintage Guitar magazine. Unauthorized replication or use is strictly prohibited.