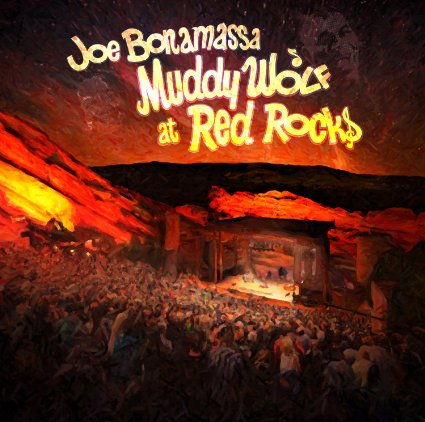 On disc 2 of Joe Bonamassa’s latest, there’s an interview with Howlin’ Wolf: “I’m gonna tell you what the blues is,” the Wolf says. “A lot of people holler about, ‘I don’t like no blues,’ but when you ain’t got no money, and can’t pay yo’ house rent, and can’t buy you no food – you damn sure got the blues!”

Cultural appropriation aside, this is an entertaining double-live album masquerading as a heartfelt tribute to Muddy Waters and Wolf. Waving the “keeping the blues alive” flag while maintaining his status as the most business-savvy bluesman in the music industry, Bonamassa preemptively strikes down his hater-aide drinking hecklers by donating $40,000 of the concert’s proceeds to charity. Bonamassa’s Keeping The Blues Alive Foundation helps fund music scholarships and promotes music education.

Backed by a world-class band performing for 9,000 screaming fans at Colorado’s Red Rocks Amphitheater, Bonamassa burns like napalm from the first note to the last. Covering songs performed by Muddy and Wolf, a healthy dose of Willie Dixon is on display. The band consists of drummer Anton Fig, bassist Michael Rhodes, Reese Wynans on keys, Mike Henderson on harp, a horn section, and guitarist Kirk Fletcher.

Weaving archival interviews and performances from Waters and Wolf, producer Kevin Shirley stops short of going full-on Ken Burns to make way for the mellifluous wailing of expensive guitars through a gaggle of vintage combo amps. The production is pristine as Bonamassa rolls through the classics as well as deeper cuts. Occasionally lapsing into minstrelsy, he sings with power and authority, even if at times he transforms the raw sexuality of songs performed in gritty nightclubs on Chicago’s Southside into mere platforms for flawless solos and tonal perfection.

Twenty-five tracks provide epic ripping on songs like “Tiger In Your Tank,” “Evil (Is Going On),” and “Spoonful.” The rhythm section is perfection; Fletcher contrasts Bonamassa’s studied vocabulary with swinging authenticity on “Stuff You Gotta Watch,” “All Aboard,” and “Shake For Me.”

Bonamassa’s original material concluding disc two is arguably more notable, showcasing his trope-heavy hybrid that has little to do with music played in blues clubs.

There are better blues albums, but this contains iconic songs and incendiary performances from start to finish.