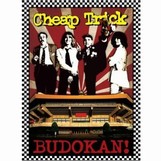 Okay, Rick Nielsen was no Jimi Hendrix. But who cares – he hit the road with an army of vintage guitars and now-valuable early Hamer solidbodies, which is cool enough! You can enjoy more of Rick’s licks and awesome axes in this massive three-CD and 5.1-mixed DVD set of Cheap Trick’s famous 1978 concerts in Japan. Hipper still, Epic is also reissuing the original album in LP form for the growing number of vinyl lovers.

So how does Cheap Trick sound 30 years after reigniting the closest thing to Beatlemania? Awesome. These live cuts do a great job reminding us how exciting and refreshing the quartet was in its late-’70s heyday. Fusing the pop élan of the Fab Four, the raw riffery of the Yardbirds, and a burst of punk energy, Cheap Trick exploded across the rock universe in 1978. While their stay in the limelight was relatively short, it was nevertheless a memorable epoch, as Budokan proves conclusively.

A few things stand out in particular. In hindsight, Robin Zander was a killer frontman, with great vocal pipes, pop-star looks, and nice riffs of his own on a white ’52 Telecaster (owned by Nielsen). The latter can be seen and heard playing all manner of solidbody, from old Strats and Les Paul Standards and goldtops, to several Explorer-styled Hamers. On stage left, bassist Tom Petersson can be seen playing his trademark Hamer 12-string bass, an instrument whose deep, chiming tone became part and parcel of the Cheap Trick sound.

All the classic tunes are here – “Surrender,” “I Want You to Want Me” (featuring hot, Jeff Beck-styled leads from Nielsen and Zander), “Clock Strikes Ten” and the punky gem “Auf Wedersehen.” They all come together to form a highly recommended set. And perhaps best of all, Cheap Trick is still together and performing regularly, as seen on the DVD in a recent interview and an anniversary concert at Budokan last spring. And yep, they still sound great.