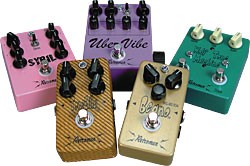 Retroman proprietor Joe Wolf is a dedicated one-man-shop that designs, builds, and finishes effects pedals all by hisself.

Wolf, a guitarist and electronics engineer, began building pedals for his own use, and some for friends. Not long after, and with the encouragement of his wife, Amy, he started Retroman in 2002. As the name implies, Wolf builds pedals intended to replicate classic pedal tones. He recently offered to send us five: the Beano, Sybil, Wolf Tone Machine, and his latest creations, the Uber Vibe and Tonezilla.

The Beano was Wolf’s first production unit, and he picked a good place to start – with a replica of the renowned Dallas Rangemaster used to great effect on the classic 1966 album John Mayall’s Bluesbreakers with Eric Clapton. The pedal employs a four-position Tone switch, Drive control, and a Hissbuster knob (labeled HB) that does an effective job, but also affects the pedal’s high-end shimmer. The Beano also has a true-bypass on/off switch with indicator, input/output jacks, and a power supply jack. The heart of the Beano’s tone lies in its new-old-stock (NOS) Mullard OC44 transistor.

We plugged in the Beano between a solidbody guitar with Duncan pickups and an all-tube amp and it added a nice, boosted distortion. The tone switch produced a wide range of tones, from fat to trebly. Each increment produced a change in balance between bass and treble, with the full-on position sounding like a wah pedal with the treadle set halfway. Harmonics were incredible, and the gain didn’t get mushy, no matter how far we pushed it. This pedal certainly adds life and natural drive to the signal.

We next plugged in the Sybil, which is essentially two fuzz pedals in one sweet pink box, one (labeled “Germanium”) employing an NOS AC188 transistor, the other (labeled “Silicon”) using low-gain transistors. Both have their own set of controls for Volume, Fuzz, and Tone. They share a true-bypass on/off stompswitch and a Series/Parallel toggleswitch, in/out jacks, and power supply jack.

We found the Sybil to be quite capable of covering a wide range of fuzz tones. The design allows you to blend the circuits to create fuzzes ranging from thick and full to shrill and trebly, and all points in between. The tone controls help the Sybil produce a near-limitless number of sweet spots and fuzz variations. If you’re into the vintage fuzz thang, this pedal should be all you’ll ever need.

The ToneZilla does a fine job of making vintage fuzz tones that, as you play faster, sport the characteristic note decay. Using the tone, pre-gain, and fuzz knobs, we readily dialed in fuzz to our liking. And whether we asked for a little or a lot, the ToneZilla always stayed controllable.

The Wolf Tone Machine is a fuzz/drive pedal available with an optional octave divider, similar to a vintage Roger Mayer Octavia. It has controls for Volume, Tone, and Sustain, along with true-bypass stompswitches for turning the effect on/off, and for engaging its Octave circuit. Both employ LED indicators. The Wolf Tone Machine produces retro-style fuzz, with the Sustain control helping the pedal produce varied amounts of fuzz.

Kicking on the Octave switch is akin to having Hendrix walk through the door. If you’re trying to replicate his old solos or any late-’60s/early-’70s sounds, or if you simply feel your sound is missing something, this pedal may well be just what you seek.

Though it produced fantastic tones, the Univibe also had a reputation for being inconsistent. Some sound notably better than others. Joe uses matched “light-dependent” resistors in the Uber Vibe to ensure each will sound its best. And Wolf takes the concept a step further, making it stereo and giving it a JFET buffer to add sparkle to its clean sounds. The unit also uses four filter controls that shape each stage, letting the user adjust fluidity and wow. The Uber Vibe also has two Volume controls, as well as controls for Depth and Speed, true-bypass on/off switch with indicator, Vibe/Chorus toggle, input/output, jacks that lets the Uber Vibe interface with other aftermarket devices, and a power supply jack.

With our ’70s Fender Strat, we again flashed back to Hendrixland, with its swirling, liquid tone. This pedal nails it perfectly, and by using its filters we could practically perfect every nuance. Simply beautiful. We ran the unit in stereo; we’re pretty sure Jimi would’ve loved the expanded, lush tone. Flipping to the Vibe setting, we were greeted with a smooth, even vibrato reminiscent of the classic Univibe. The buffer produced a bit more sparkle on clean settings. With its improvements, the Uber Vibe just may be the best reproduction of the original Univibe.

Wolf has done an outstanding job with these designs. His pedals boast solid all-around workmanship, and fantastic bang for the buck.


Retroman effects
Price: $150 to $270.
Contact: www.retroman-music.com.
This article originally appeared in VG‘s February 2006 issue. All copyrights are by the author and Vintage Guitar magazine. Unauthorized replication or use is strictly prohibited.