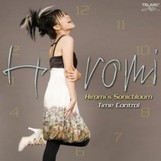 Ignore the silly cover photo – this ain’t no pop-diva record. Instead, it could be the jazz-rock CD of the year. Hiromi Uehara is a monster jazz pianist who’s been making a name for her trio over the past few years. Sonicbloom, however, is the name of her expanded lineup, with the addition of fusion guitar whiz, Dave “Fuze” Fiuczynski.

Both Hiromi and Fiuczynski are instrumental mavericks who are breaking down our preconceptions of what “jazz rock” is. The music teeters between straight-ahead jazz and crazy fusion, featuring virtuoso musicianship throughout, especially from the killer rhythm section of bassist Tony Gray and drummer Martin Valihora.

Guitar fans will be most intrigued with Fiuczynski’s solos, which are simply explosive. Better known as leader of the Screaming Headless Torsos, Fuze has tremendous chops and clearly is a great sightreader – listen to him double Hiromi’s piano licks at the speed of light. But he has a great sense of groove and can hang back when necessary. There are also a bevy of strange guitar sounds, some of which Fuze achieves on his custom fretted and fretless guitars. For example, he uses a Johann Gustavsson doubleneck, which accommodates a 12-string fretless electric oud for the top neck, and a 7-string neck featuring a regular 6-string vibrato and fixed low-B string. Yikes!

The CD’s Latin-tinged opening track, “Time Difference,” is a true scorcher, bringing to mind vintage Return to Forever, while “Time Out” is a funky jam featuring some of Fiuczynski’s loopy, out-of-tune lead licks. The guitarist’s barely tonal lines on “Time and Space” are just as crazy, but here long, Hiromi’s bluesy piano licks bring the music back down to Earth, creating a striking contrast. Ultimately, Fiuczynski’s kooky techniques may challenge the way you think a guitar should sound.

At the end of the astounding CD, you realize that nothing is off limits for this groundbreaking jazz unit. Check it out, then work your way into the rest of Dave Fiuczynski’s fascinating catalog. This is contemporary fusion at its best.


This article originally appeared in VG‘s Jun. ’07 issue. All copyrights are by the author and Vintage Guitar magazine. Unauthorized replication or use is strictly prohibited.