Home Classic Instruments The Birth of the Gretsch Duo Jet 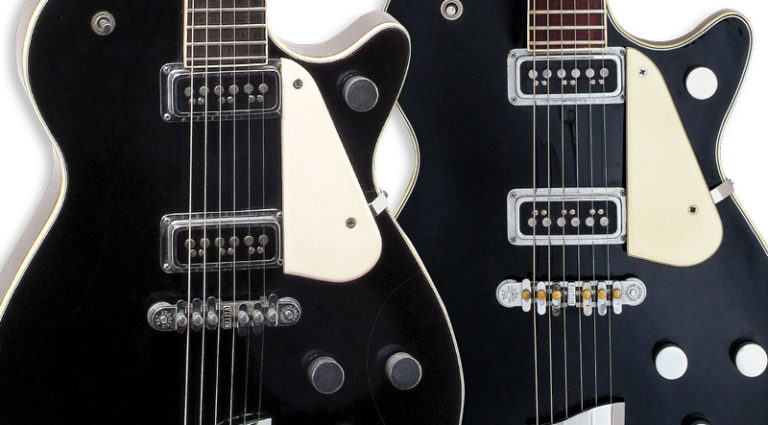 In 1950, Leo Fender introduced the Broadcaster. The first solidbody electric Spanish guitar to bear his soon-to-be-famous name, its thin profile, light weight, and utilitarian dual-pickup configuration combined to make the guitar an immediate success. Gibson, which had dominated the electric-guitar market for years with its archtops, entered the emerging electric solidbody market after approaching musician Les Paul with plans for a version of their own. The concept proved popular, as the guitar sold almost 4,000 units in 1952 and ’53.

The Gretsch Company’s efforts in the electric archtop market were truly modest – it offered only three models. But as 1953 dawned, its response to the success of the solidbody was swift and came in the form of the “Gretsch Electromatic Solid Body Guitar,” a.k.a. the model 6128 Duo Jet.

Arriving in stores in the fall of ’53, the 6128 superficially resembled the Les Paul in terms of body contour and features – dual pickups, large fretboard inlays, scale length, etc. But in reality, there were key fundamental differences. The body of the Duo Jet was actually chambered, which not only reduced its weight but contributed to its sonic signature. Its pickups were the same single-coil DeArmond Dynasonics the company used in its electric archtop models.

The Duo Jet’s elegant black finish was a rather dramatic departure for the brand. No less distinctive than the metallic gold on the Les Paul, the Duo Jet’s black/chrome/white aesthetic was so appealing one could speculate Gibson’s 1954 Les Paul Custom (a.k.a. “Black Beauty”) was in some way inspired by it. The black top on many early Duo Jets was made of Nitron, a plastic used to cover drums, including those made at the Gretsch factory.

The first batch of Duo Jets consisted of 150 guitars comprised of serial numbers 11900 through 12049. Several specimens have been documented with potentiometer (pot) date codes from the 33rd week of 1953 (which fell in early August), which suggests a manufacture of late August or September. Another piece of data relating inaugural batch is a bill of sale from Kendle Music Company, Nashville, for a Duo Jet with serial number 11915. Dated September 26, 1953, the artifact provides further evidence manufacture could well have been in early September. Individually, the pot-date codes and bill of sale are inconclusive for identifying when the batch was assembled, but together they establish a narrow window – within weeks – when it’s probable this production occurred. Not only is this interesting and may confirm when the Gretsch solidbody era began, but it’s useful in calibrating the chronology of Gretsch’s guitar production in the early 1950s.

A unique and identifying feature of the guitars from the first batch is the “script logo” inlaid into their headstocks. This style of Gretsch logo, along with the lack of a marker at the first fret, are carryovers from the design aesthetic of the Synchromatic acoustic archtops Gretsch made from 1939 through the late ’40s. This first group of Duo Jets is the only full batch of solidbody guitars to possess the script-style headstock logo, resulting in their modern day reference as “scripty Jets.”

Technologically, “scripty Jet” guitars were the first Gretsch electrics to benefit from a truss-rod adjuster. Another innovation originally applied to some early-’50s Electromatic archtops was the Melita “synchrosonic” adjustable bridge. Touted for its ability to intonate individual strings to a finer degree than other bridges, it was used on the Duo Jet in several variations. Many of the earliest – perhaps the first half of the initial 150-guitar batch – had a fixed Melita bridge, while later examples possessed the more-common “floating” Melita (which, like all floating bridges, is held in place by string tension instead of being anchored to the top). Interestingly, a few guitars from the initial run have also been documented with a prototype Melita with a body made of BakeLite instead of cast aluminum (or later, chromed pot metal). These rare Melitas have surfaced on other Gretsch models attributed to late ’53.

A handful of script-logo Duo Jets from this batch have been documented with a Gretsch drum badge affixed to their lower bout. It remains unclear why only a few were apparently granted this accoutrement, but many Gretsch aficionados consider a “scripty Jet” with this rare feature to be the ultimate find.

Guitars from that first batch of 6128s are considered the sole examples of 1953 Duo Jets. The next batch – considered the first Duo Jets of ’54 – was another 150-unit group comprised of serial numbers 12950 through 13099. The Gretsch factory typically began producing the next-model-year guitars at the end of the previous calendar year, much as auto manufacturers do today, so it’s more accurate to track the year of a Gretsch based on its features rather than its actual date of production (which is usually impossible to verify, anyway). The feature changes that define the ’54 model year for the Duo Jet include a new “T-roof-style” Gretsch logo on the headstock and a block marker at the first fret. These aesthetic adjustments make it very easy to differentiate between otherwise identical 1953 and ’54 Duo Jets.

The Duo Jet was Gretsch’s stalwart model for more than a decade, and its commercial success established the company as a serious player in the solidbody market of the ’50s.

This feature originally appeared in the February ’11 issue.