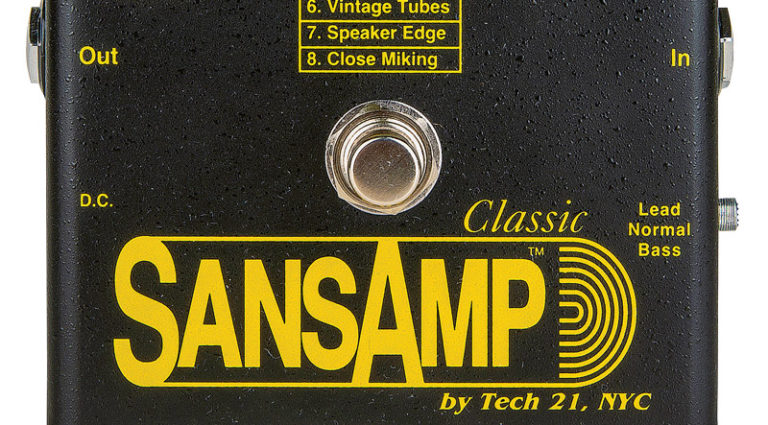 Every so often, new gear arrives that reminds us all how some builders got it right the first time – Leo Fender’s Telecaster is the quintessential example. Similarly, Tech 21’s Andrew Barta nailed the direct-guitar concept in 1989 with the SansAmp pedal. The company recently reintroduced the all-analog SansAmp Classic after a five-year hiatus, and it scores high marks for tone, consistency, and overall DI hipness.

Despite its small footprint, the box offers vast tone adjustments. There’s a three-position input offering voices meant to resemble Marshall, Mesa/Boogie, and Fender preamps. Pick the one that sounds best with your guitar, bass (or any instrument, really) then explore the four knobs; Presence Drive defines the upper-mid zone, Amplifier Drive contours the virtual power amp, High provides a massive upper-end sweep that must be heard to be believed, and Output controls final volume while adding bottom frequencies as it’s turned up.

The meat of the matter is a bank of eight DIP switches delivering another payload of amp EQ. These Character controls offer myriad amp and cabinet sounds. Play with them until you find the tones you crave – and then hit the Record button for cutting tracks or even playing live through a PA.

More than 30 years later, the SansAmp Classic can still do it all. It’s a true marvel of analog, direct-guitar technology.