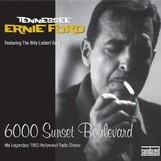 As if his comedic talents weren’t enough (from his early days as a disc-jockey to hosting his own TV show to guesting on “I Love Lucy”), Tennessee Ernie Ford was one of the most versatile singers in country music. In fact, pigeonholing him as merely country (despite his popularity in that arena) shows how limitless his reach was.

Ford’s booming baritone could, indeed, wrap itself around a country song – the best evidence being his #1 cover of Merle Travis’ “Sixteen Tons” in 1955. But his first foray into gospel music yielded the genre’s first gold record, and his boogie numbers rocked and rolled as hard as any songs of that yet-to-be-named style.

And this batch of buried radio treasure, from 1953’s syndicated Tennessee Ernie Ford Show, illustrates his ease with the Great American Songbook as well as contemporary country covers, turn-of-the-century obscurities, and just about anything else. And as pointed out in the liner notes, he and his swinging quintet sometimes cranked out a dozen shows in a day – as many as 50 songs. All told, in a three-month span, they cut 1,300 songs with nary a repeat nor a rehearsal! Needless to say, to pull off such a feat, Ern’s band needed to be as versatile as he.

Led by pianist/accordionist Billy Liebert, the combo included guitarist Billy Strange and Speedy West on steel. Strange would later record with everyone from Frank Sinatra to Jan & Dean, in addition to writing the Chubby Checker hit “Limbo Rock,” but here confines himself to strumming strong rhythm; West, on the other hand, really goes to town – or, more accurately, to outer space.

The loose, on-the-spot, jam atmosphere gives West free rein to combine musicality and wildness as only he could (dig his mind-boggling take on “Lover”), while demonstrating early on the steel guitar’s potential as a jazz instrument.