The Martin D-28 was first issued in 1931. And all dreadnought Martins made from 1931 through ’33 featured a 12-fret (a reference to the point at which the neck meets the body) slotted-head neck and extended-length body, rather than the more familiar squared upper bout and shorter body of modern-style dreadnoughts. Martin’s first 14-fret-neck model was the OM-28 issued in ’29. By ’32, 14-fret necks were issued on the 0- and 00-size style 17 and by ’34 the 14-fret neck became standard on most steel-string Martin guitars with the exception of styles 21 upward in the 0 and 00 sizes.

Unlike Gibson’s approach, which was simply to keep the same body style and shape, but move the bridge position when shifting from 12-fret to 14-fret necks, Martin approached the issue by keeping the bridge in essentially the same position, but shortening the upper bout to accommodate a 14-fret neck. Therefore, 12-fret Martin guitars have a longer body and larger air chamber than equivalent 14-fret models. This results in a somewhat different sound. In the opinion of many, 12-fret extended-body Martins have a smoother, mellower sound with better balance and more sustain than 14-fret models.

Although Martin serial number records do not indicate this guitar has custom features, it is indeed an unusual custom-order instrument. Not only is it a 12-fret instrument issued at a transitional time (the 14-fret model had already been issued), but it features a solid (rather than slotted) peghead, the typical 17/8″ nut width seen on 12-fret slot head guitars, and style 45 neck ornamentation with triple-bound peghead, single-bound fingerboard, vertical C.F. Martin peghead logo inlay, and the typical style 45 snowflake fingerboard inlays. The body is the same as a 1933 12-fret D-28 with the extended-length Adirondack spruce top with scalloped bracing and herringbone trim, Brazilian rosewood back and sides, typical style 28 “zipper” back stripe and ivroid body binding. The open-back Grover tuners are the earliest Grover design for a solid peghead, and are gold-plated, rather than nickel-plated, as was typical on style 28 Martins. 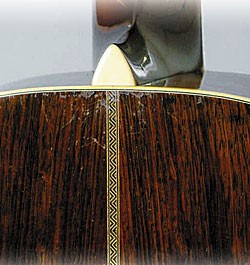 The “zipper” back stripe of the 12-fret D-28, typical of the model. Photo: Kelsey Vaughn, courtesy Gruhn Guitars.

As is typical of 12-fret pre-World War II Martin dreadnoughts, this is a fantastic-sounding instrument with great power, balance, and sustain, but a less percussive sound than the 14-fret dreadnoughts. It’s about as good as any flat-top. And while some players might prefer a narrower neck, this one is quite comfortable.

The history of this instrument has been traced to circa 1940, when it was bought used by the father of the people who brought it to Gruhn Guitars. It looked the same in their very early family photos as it does today. Although Martin’s records make no indication it was a custom order, they do indicate the serial number was entered in their records March 8, 1934, and that this was the only D-28 in the work order batch. There is no evidence that the neck or the ornamentation is anything but original. Had it been sent back to the factory to have style 45 neck ornamentation added (which the factory did offer to some performers such as Gene Autry, who had two 12-fret slothead guitars, a 0-42 and a 00-42, converted with more fancy neck ornamentation and his name on the fingerboard) the work would have been done to whatever specifications were available at the time, including modern fret wire after late ’34. Since this guitar has the earliest Grover tuners and bar frets, which were discontinued in late ’34, it almost certainly left the factory in its present configuration rather than having been altered at a later date.

This is an exceedingly rare instrument. Martin’s records show a notation of only one earlier 12-fret D-28, dated February 19, 1934, with style 45 neck trim, solid peghead, gold-plated tuners, and sunburst-finish top. Martin historian, the late Mike Longworth, apparently saw this guitar during his tenure, but we have been unable to trace its whereabouts.


This article originally appeared in VG‘s July ’05 issue. All copyrights are by the author and Vintage Guitar magazine. Unauthorized replication or use is strictly prohibited.
The Guide