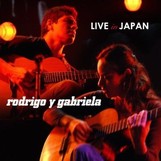 The guitar duo of Rodrigo Sanchez and Gabriela Quintero created a huge sensation with its eponymous 2006 CD – the pair’s acoustic attack equal parts flamenco and metal.

If there was any doubt that all-instrumental music could hold a rock audience’s attention, it was certainly dispelled last March, when Rod and Gab played their first show in Japan. Thankfully, it was recorded, and is available as a limited edition, containing a 14-track CD and five-song DVD. The DVD is, if nothing else, a great visual aid, because just listening to so much rhythm, lead, and percussion, it’s hard to believe it’s all coming from just two steel-string guitars played live. Some songs, in fact, contain sections that are entirely percussion – Quintero being particularly adept at beating and slapping her guitar’s body.

Metallica’s “Orion” sits comfortably alongside energetic duo originals like “Foc” and the opening “OK Tokyo.” Each member takes a solo turn (Gabriela employing a wah, Rodrigo tossing in some jazzy octaves) before their signature take on “Stairway To Heaven.”

While their fiery closer, “Diablo Rojo” (somewhat of a rock radio hit), is a real showstopper, their intense but sensitive arrangement of the Dave Brubeck jazz classic “Take Five” reveals potential for growth beyond mere chops. But either way, this is one of the most exciting guitar acts on the scene.