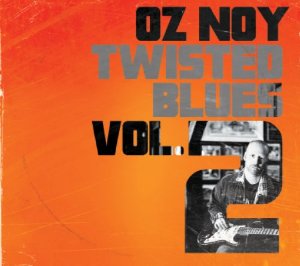 Amidst Noy’s quirky, energetic, funk-charged compositions is gutbucket slide. “You Dig” features slide player Greg Leisz, who offsets Noy’s intervallic bop with the raw and the nasty. Chick Corea and Allen Toussaint are featured on “Rumba Tumba” and “Slow Grease” with swampy excellence.

Compositions groove in real-time human interaction as Noy is supported by the stellar lineup of Will Lee, Roscoe Beck, Dave Weckl, Keith Carlock, and Chris Layton. Noy is at the top of his game as he effortlessly weaves jazz concepts with Stevie Ray Vaughan swagger. “Come Dance With Me” and “Get Down” displays his deft use of pitch manipulation, creative use of effects, and dynamics.

Eric Johnson and Warren Haynes make an appearance on “EJ’s Blues” and “Blue Ball Blues” with frighteningly brilliant playing from everyone. Noy manages to bridge the gap between the sultry and earthier aspects of the blues while injecting jazz intricacy and rock muscle. This is the best blues-fusion record of the year with the best guitar tones found anywhere.