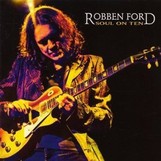 Robben Ford’s last live album included only acoustic guitar. So, given that eight of the 10 cuts on this new disc feature Ford cutting loose on electric and his choice of material is pretty much perfect, this should be a huge hit with fans.

Every track here is highlighted by a Ford solo that’s soulful, full of surprises, and takes roads (few if any other) guitarists would. Two songs from 1999’s woefully underappreciated Supernatural – the title cut and “Nothin’ to Nobody” – get the full treatment. The latter has a great lyric, killer changes, a guitar tone to die for. The former is a funky version with lots of wah rhythm guitar that works its way through mid-eastern guitar and a free jam before it wraps up.

There are other gems, too, with “Indianola” rocking and “How Deep In the Blues” showcasing the entire band, which features Toss Panos on drums, Travis Carleton on bass, and Neal Evans on organ. The band takes on covers that cook, seemingly against all odds; “Spoonful” is played exactly as it should be, while the cover of Jimmy Reed’s “Please Set a Date” is boogie heaven. The disc ends with two new songs recorded in the studio. “Don’t Worry About Me” and “Thoughtless” point to a songwriter and player at the height of his game. The changes are nice and never clichéd. The solos are perfect and the vocals strong and assured. Soul On Ten is as satisfying a record as this great guitarist has delivered since he signed with Concord four albums ago.