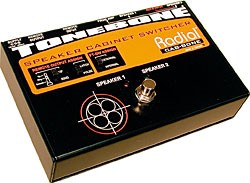 Though Radial Engineering’s Switchbone, Cabbone, and Loopbone pedals can all technically be classified as “switchers,” each has a distinct function.

The Canada-based Radial started making pedals in 2000 and today designs gear that is used by a long list of big-name artists.

Tonebone pedals are housed in a heavy-duty steel chassis that measures 63⁄4″ x 41⁄4″ x 11⁄2″. Each is finished nicely and silkscreened to perfection. The switches are heavy-duty, and each included an AC power adapter.

For this turn with Radial (our first involved the Classic, Hot British, and Switchbone in the April ’04 issue), we used two all-tube Peavey amplifiers, one 2×12″ cabinet, and one 4×12″ cabinet. Our signal originated with a Schecter solidbody with stock humbuckers.

The Cabbone, Switchbone, and Loopbone pedals provide unique solutions to problems musicians have been battling for years.

The Cabbone is a cabinet selector that allows a player to run two speaker cabinets using one amp head. With Radial’s patented Slingshot input and output jacks, you can also simultaneously switch channels on an amp. That means you can have your clean channel run your 2×12″ cab and your distorted channel run to your 4×12″ with just one switch! Ultra cool. The pedal uses one amplifer-input jack and two speaker output jacks, with an additional speaker output (ALT-Z) for amps with multi-tap transformers (and thus, variable speaker impedance options). It also features output-assign switches that let the player manipulate their amp’s channels. A speaker selector switch with LED indicators tell which cab is being used. The unit’s design ensures there is always a load on the amp, which not only protects its transformers, but eliminates “dead air” delays in the process.

The Peavey JSX’s complex channel-switching design let us use the Cabbone to its fullest potential. 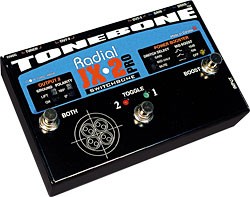 The Switchbone lets a player run two amplifier heads into one speaker cab, with full channel/head switching capabilities. It’s available in three versions specifically for tube heads (VT), solidstate heads (SS), and the TS lets you switch between tube and solidstate amps. All three feature two amplifer input and output jacks, one speaker-out jack, and a Slingshot remote switch jack, one buffered and one direct input jack. The buffered jack is for guitar signals that have no preamp, while the direct accepts preamped signals. Again, LED indicators tell you which head you’re using (or if both are on).

We plugged in the heads and cab per the instructions and found that the Switchbone does exactly what it promises, and does it very well. It can be a very useful unit, especially in a world where 99 percent of the channel-switching amps on the market have either a good clean or good distorted tone – it’s rare that one amp does both well. 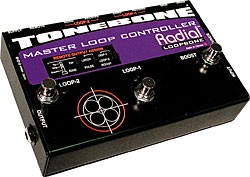 The Loopbone is a master effects loop controller that allows for switching between or combining two effects loops. The unit also has a variable power boost for solos.

With the Loopbone, you can isolate noisy, impedance-robbing pedals from the chain, or switch between (or combine) two chains of effects. With the Slingshot remote feature, you can also change an amp’s channel while you move between effects loops. This creates nearly endless switching options, especially when used in combination with the Switchbone or Cabbone.

The Loopbone has two sets of effects send/receive jacks, and the Slingshot jack. It also features an adjustable gain, a drag control that eliminates signal loss, and a tuner-out jack.

We set the Peavey Butcher for clean sounds and plugged in the Loopbone, along with Danelectro distorton and delay pedals in one loop, and a Danelectro chorus , MXR Dynacomp, and another Dano delay in the other. We adjusted the drag and pre-set the boost, then toggled between effects loops. One loop delivered a very nice delayed rock lead tone, while the other proffered a nice clean/compressed tone with a touch of chorus and delay.

Switched to boost mode, the setup produced a transparent volume boost with a slight edge on the clean setting. Switching back to the distorted loop with the boost on produced an equally transparent, but searing, solo boost. Very likeable! The Loopbone’s boost feature is fantastic – and you can manipulate gain boost with its inset control.

And again, even though the Peavey isn’t a channel-switching amp, with the Loopbone, we were able to do just that.

This go-round with the Radial ‘Bone pedals reinforced what we found in our previous tests; they deliver as promised, giving a player extremely usable switching and effects options that simply haven’t been previously available. By combining the Loopbone with either the Cabbone or Switchbone, the options are numerous.

Giving your rig the ability to achieve the perfect amp and effects setup, as these pedals do so well, is priceless.