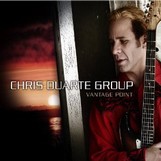 It’ll surprise few familiar with Duarte to learn that this disc is full of hardcore Strat tones, killer blues chops, and lyrics that get to the point. Cynics might say “What’s the point?” but that would be an indication that they’re missing the point.

Duarte does what he does as well as anyone out there. The fire is evident and he’s helping keep alive a form of music that could easily sneak through the cracks; remember how fresh SRV sounded in the early ’80s?

Duarte’s guitar chops are on full display on cuts like the aptly titled “More Boogie” where he goes for the throat with his clean (but still extremely nasty) tone. The stomper “The Best I Can Do” is a call-and-response do-it-yourself session with very hooky guitar and vocal figures. The pop-rocker “Babylon” is the real showcase for Duarte’s playing on the disc – rowdy, funky rock that ends with a melodic floating solo proving Duarte’s versatility. It’s the kind of thing he should try more often. Same for “Woodpecker,” a jazzy funk instrumental that again shows he’s no one-trick pony.

Duarte’s vocals are always heartfelt and serviceable, even if at times they simply serve as a bridge between solos. And Joseph Patrick Moore (bass) and Jeff Reilly (drums) supply the perfect support.

Jack Bruce and the hr-Bigband