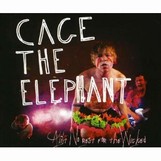 Brothers Brad and Matt Schultz had a rough youth in small-town Kentucky, where music, money and hope were hard to find. Growing up in an eventually broken home with six people squeezed into a two-bedroom apartment, they sneaked in Bob Dylan and Jimi Hendrix music behind the backs of disapproving parents.

When Brad was 12, he spent 20 hard-to-come-by dollars on a used guitar. That it fell apart before the brothers could afford a replacement is testimony to the spirit behind Cage The Elephant.

The band writes and plays like it’s important, the way you’d expect from a bunch of misfits who grew up in a town where success meant working at the same plant where your parents worked. The brothers chose a different path, joining Jared Champion (drums) and Brad Tichenor (bass) to form Cage; though their songs about alienation (“In One Ear”), crooked preachers (the title cut), and borderline hopelessness (“Lotus”) give the impression there wasn’t much choice involved – it was more a soul-salvaging need.

On “Ain’t No Rest For The Wicked” powerful semi-metal rhythms meld with Brad’s impressively sophisticated, sometimes wrenching, psychedelic guitar sounds while brother Matt spits defiant mile-a-minute lyrics in a perfect garage-band voice; Cage The Elephant plays like they’ve been listening to 13th Floor Elevators and watching Jim Jarmusch movies every day since elementary school. They play like they mean it; there’s just no way their music could be this viscerally charged, this real, this good, if they didn’t.