Home Music Murry Hammond – I Don’t Know Where I’m Going But I’m On... 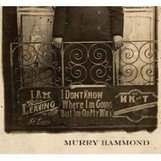 As a solo artist, Murry Hammond is a blend of Leonard Cohen and Jimmie Rogers. The acoustic-based songs on this album aren’t as lively as his work with his former band, Old 97s, but they’re far from lifeless. Rather, they’re more contemplative and suited to Hammond’s lonesome cowboy voice.

Even though he kicks things off with a sentimental ballad like “What Are they Doing In Heaven Today,” neither it nor his haunting version of the Carter Family’s “I Never Will Marry” are remotely depressing. The harmonium on “Marry” and Hammond’s forlorn yodel exemplify the solitary tone and nature of the album. At his best, he is reminiscent of Gordon Lightfoot in his ability to bring the sepia-toned color of his stories into focus and make music that is provocative and breathtakingly beautiful. Despite its instrumentation (acoustic guitars, banjos and standup bass), Hammond’s music is more old-time folky than bluegrass, and despite Old 97s’ Texas connections, it’s more evocative of small upper-Michigan towns and Adirondack villages and Minnesota mining camps. In “Satan, Your Kingdom Must Come Down” and “As You Roll Across The Trestle,” Hammond touches on the type of elegantly simple gospel heard in simple, unadorned country churches with plain pine pews and hardworking plainspoken congregants. Not surprising, since he sings that music in his own church. Don’t let that put you off anymore than might the Carters’ “Will The Circle Be Unbroken?” Hammond isn’t proselytizing; he’s celebrating the music that moves him and the music – secular and otherwise – will likely do the same for you.