Home Music D.A.D. – No Fuel Left for the Pilgrims 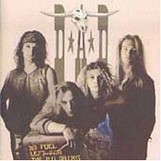 On their first major label release, the band formerly known as Disneyland After Dark (changed after a threatened lawsuit by the Disney Co.) was poised for a breakthrough in the U.S. with backing from Warner Brothers, and video in heavy rotation on MTV, and a melodic approach to metal that featured big guitars and no keyboards. Alas, it didn’t happen.

Perceived as a “hair band,” their debut was blunted by the rapid change of musical tastes and embrace of grunge. That’s too bad because this record, originally released in 1989, is as compelling as any from the era. Every song is well-crafted with melodic hooks, catchy choruses, and surprises like a groovy lead played on a Gretsch in several songs. Though No Fuel, backed by the Warner machine, was not a bad seller, the followup stiffed and D.A.D retreated to Europe where they gained and maintained a big following.

This reissue has been remastered, but the original was so well-recorded it’s difficult to hear any sonic changes. Still, it serves as a reminder of how much great music falls through the cracks when there aren’t enough ears to hear.


This article originally appeared in VG‘s Oct. ’08 issue. All copyrights are by the author and Vintage Guitar magazine. Unauthorized replication or use is strictly prohibited.
Current Issue

Preston Shannon – All In Time