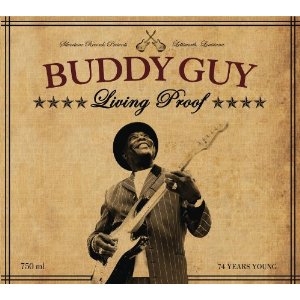 As he did on Guy’s Skin Deep, drummer/producer Tom Hambridge co-wrote all but one song, with Guy or Gary Nicholson; he penned the title track by himself. But whereas the 2008 effort called in a relatively small cast of session players, here the ensemble is pared down to almost a single rhythm section – David Grissom on rhythm guitar, Double Trouble’s Reese Wynans on keys, and Michael Rhodes alternating with Tommy McDonald on bass, with Hambridge again on drums.

The result has a cohesive band feel, freeing up Guy to do what he does best – go crazy. A minute and a half into the loping opener, “74 Years Young,” Guy explodes with a sonic burst in which specific notes and licks aren’t near as important as the effect of all that in-your-face aggression – nearly as perfectly sick as his work 40 years ago (for example, This Is Buddy Guy) and twice as loud.

Conversely, Buddy begins economically on “Thank Me Someday” (another reworking of the standard “Hoochie Coochie” groove), before building to a flurry that would do Link Wray proud.

The grooves range from the funky “On The Road” (with Grissom employing wah-wah) to the eight-bar shuffle of the title tune, from the stately gospel sweep of “Everybody’s Got To Go” to an Excello/T-Birdsesque “Too Soon” – with Guy using his signature Martin acoustic, a ’57 Strat, a ’74 Telecaster Deluxe, and a 335. The two cameos are both ballads – a yearning “Stay Around A Little Longer,” featuring B.B. King, and a haunting “Where The Blues Begins,” with a beautiful, big-toned solo by Carlos Santana.

An artist often justifiably criticized for inconsistency, Guy seems to be on a roll of late – lest anyone forget just what an amazing guitarist and singer he can be when he puts his mind to it.