Ernie Hawkins is a genius of the acoustic guitar who has mastered the country-blues stylings in the vein of Reverend Gary Davis. 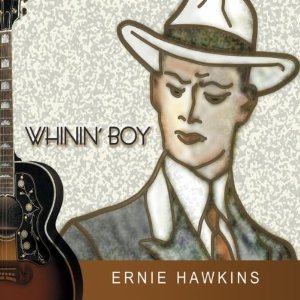 On Whinin’ Boy, he finds himself in a band setting more than on past records. His guitar is the foundation for fine playing by Paul Consentino on clarinet and Joe Dallas on Trombone. Still, there’s plenty of guitar; songs like the title cut (a Jelly Roll Morton classic) give ample evidence of his strong playing and his skill in negotiating blues and jazz changes. Other cuts, like “Susie (Of The Islands),” and the chamber-esque “I’m Coming, Virginia” showcase how his skill at supporting other players.

Hawkins jumps to the forefront on Little Brother Montgomery’s “Vicksburg Blues,” a showcase for what he does as well as any contemporaries. His “The Southbound Sneak” shows fine chordal work in a tip of the cap to Blind Blake. The fun of Big Bill Broonzy’s “Shuffle Rag” turns it into an almost-acoustic-rock tune with fine interplay between Hawkins and Marc Reisman on harmonica. Hawkins vocals are executed nicely. His singing doesn’t stand out, but delivers the tunes the way they should be delivered.

Records like this show a form of music heard by babyboomers while they grew up. There’s still a lot of it out there, and as long as artists like Hawkins continue to inform listeners on the original masters, it’ll be around forever.