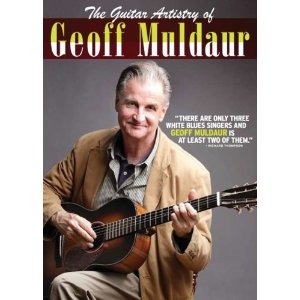 He quickly joined the Jim Kweskin Jug Band, resulting in several albums and eventually a marriage to the group’s fiddler, Maria D’Amato (who dueted on the underground radio hit “Chevrolet”).

He later went into film and television scoring, but in ’98 re-emerged with Secret Handshake and has lately been gigging with the Texas Sheiks.

Muldaur is far more than a guitarist (on 1972’s Sweet Potatoes, by him and Maria, in addition to guitar and vocals, he supplied organ, piano, trombone, alto sax, clarinet, bass clarinet, and percussion, along with arranging horns and strings), which is perhaps why his talents on the instrument are so underrated. Luckily, other players (like Vestapol’s Stefan Grossman) are acutely aware of his six-string talents – but, thankfully, he didn’t leave his wonderful vocal talent at the door when he made this DVD.

Muldaur plays his parlor-sized Martin in a manner not intended to impress with flash; in fact, some songs, like Eric Von Schmidt’s “Light Rain,” are beginner-level simple. But he plays the 14 selections (including Lonnie Johnson’s “Jelly Roll Baker” and Henry Thomas’ “Fishin’ Blues”) with the authority of someone who’s been doing this for half a century. Which is about how long he’s been doing it.

There’s a lot of music and history packed into this 90-minute treasure.