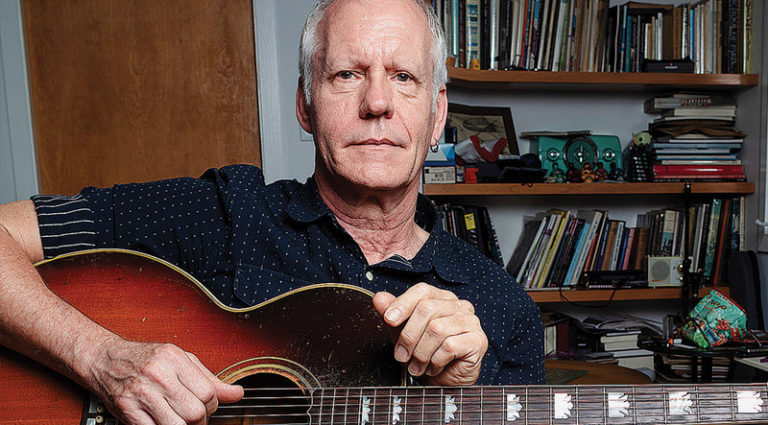 A fixture on the North Carolina music scene, guitarist/songwriter Rod Abernethy has accumulated many memories, including the purchase of his mainstay instrument, a 1954 Gibson J-200.

“When I graduated from UNC Chapel Hill in ’75, my mom wanted to give me a guitar for graduation,” he recalled. “She said I could buy any guitar I wanted, no matter the price. The only stipulation was that I could never sell it – it would always be with me to remind me of her.”

Abernethy’s carte-blanche quest lasted more than a year before finally becoming reality through a chance encounter with an employee of a gas station near Asheboro. The guitar’s owner, he noted, “…could have been Gomer Pyle’s twin brother.”

Per his mother’s wishes, the guitar reminds him of her every day.

“I started thinking about the album a couple years ago while touring the country and feeling a collective thought from folks about how things were changing faster than ever,” he explained. “Things were getting crazy before the pandemic hit, and I wrote songs that reflected that collective state of mind. How was I to know everyone’s state of normalcy would be totally redefined in 2020?

“Honestly, I had thoughts of never releasing the album because it might be viewed as too opportunistic,” he added. “But, with a push from family and friends, I decided to go ahead, and I’m really proud of it now. It’s the best writing and playing I’ve ever done.”

Most of the songs are observations on every-man issues, and more than one is based on Abernethy’s family history; “When Tobacco Was King” references the crop’s history in North Carolina, while “My Father was A Quiet Man” chronicles his father purchasing a guitar for his son.

“It was a Gibson SG Special,” he remembered. “I was the king of guitar in the seventh grade! Of course, I don’t have it now.”

There’s minimal percussion, as the songs are rhythmically driven by strong chording, though Abernethy fingerpicks the leads.

“About 10 years ago, I wanted to come up with a method that combined flatpicking with fingerpicking and thumbpicking,” he said. “I discovered Fred Kelly Slick Picks; they’re not cumbersome, like most thumb picks.

“I file and shorten the pick surface so the tip meets the string at the same angle as one of my big triangle Clayton flat picks. I use them for rhythm, lead breaks, and fingerpicking without having to change from a flat pick to a thumb pick. It took a couple of months to teach my right hand to do it with a thumb pick, but now it’s second nature.

“(Producer) Neilson Hubbard suggested not filling in the tracks with a lot of percussion. He wanted to showcase my guitars and vocals, and I trusted him with the overall vibe. I’m glad I did; I really love what he was able to capture.”

Other guitars used on the album included a Taylor Custom GA, Taylor Leo Kottke signature 12-string, and a Boucher Studio Goose. Abernethy has owned the Kottke for two decades, describing it as “…my heart and soul. It’s got the older Fishman mic/bridge pickup, and roars like a piano on stage.”

Abernethy used a slide on the Kottke model for the bluegrass-like instrumental, “Whiskey & Pie.”

The minimal electric-guitar parts were contributed by Nashville’s Will Kimbrough.

“Will nailed every track in one or two takes,” he enthused. “It was amazing to watch him.”

Abernethy believes the times offer unique songwriting opportunities, so he plans to keep busy, and he’s pleased with the new album.
“I wanted to sing songs about things I’ve learned on my journey in life, so far,” he reflected. “And it’s amazing how folks come up to me after a show to say, ‘That happened to me, too!’ and ‘You’re reading my mind.’ Connecting with people is what I live for. Of course, I’m still learning things every day. Aren’t we all?”