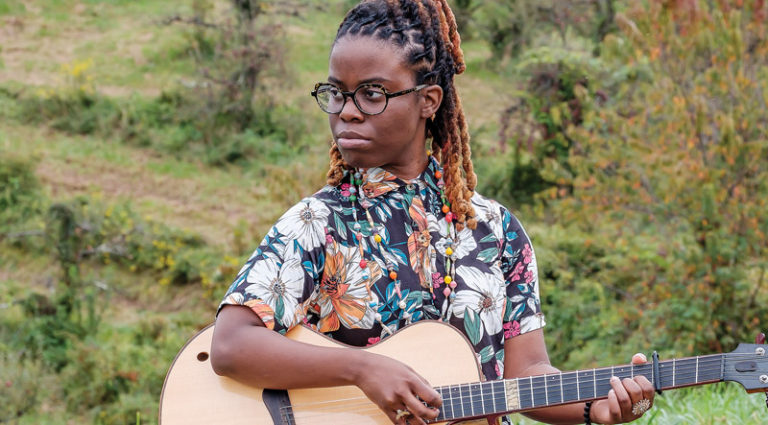 Williams has hit the ground running in the new year. She sat with VG to discuss alternate tunings, artistry, and the pursuit of one’s identity on guitar.

Do your compositions come from your imagination, or noodling?
I’d say it’s both. A lot of the time, if I’m noodling around, it’s to get an idea that I previously had in my hands, so I can figure out how to play it. Sometimes songs just come from randomly playing. That’s kind of rare. Usually, I have an idea of either an emotion or an atmosphere I’m trying to capture.

You have an idea you’re trying to execute.
Yeah, technique always serves the song. I don’t play just to use certain techniques. I’ll play it only if it’s needed to play the idea that I have – and I guess I have a lot of weird ideas (laughs).

On “I Wonder,” you’re tapping harmonics while playing something different underneath.
That’s just for the bridge part, and I’m doing it on my lap; I flip the guitar to do the tapping part. That was a technique thing I had to practice a lot to sound decent.

Is playing everything yourself important to you?
It used to be. I want to get it all in. On my first album, Unwind, I didn’t want to overdub anything. All the songs are pretty much first takes. I didn’t want to overlay anything. On Urban Driftwood, I tried to focus on the ensemble – invite other people – because it’s different and I couldn’t do everything I wanted to do. I have to bring in other people who are a lot better than me at whatever their skill is. It’s more fun, too. It’s hard to do everything.

What did you want to do differently on Urban Driftwood?
Collaborate more, broaden my compositional style, and not focus so heavily on myself as a soloist. I tried to concentrate on making the compositions better, versus “How I can make this playable so I’m the only one needed to play it.”

Unwind is a tighter-sounding record.
My playing style was very rigid at the time. When I was composing those songs throughout those years, I wanted to be a solo-acoustic player. That’s how I considered myself. Urban Driftwood came after graduating from college and playing professionally for two years. I realized, “I am a composer. I can incorporate more of that into my music.” I also like the control of doing everything myself. If something goes wrong, it’s my fault, but that’s okay. I’d rather blame myself than something go wrong and have to go after someone (laughs).

How did you get into alternate tunings?
I was bored with standard tunings. Open D was the one I really liked. Open G was the one I heard on older blues songs. Those are the two I use, primarily. Erik Mongrain also inspired me. He’s a French-Canadian and uses a lot of open tunings on acoustic guitar, as well, like open F.

You play guitar, kalimba, and tap shoes at the same time.
The kalimba thing came from Earth Wind & Fire. They have a song called “Kalimba Story,” and growing up I thought it sounded so cool with acoustic guitar. So, I bought one. After a few weeks of practice, it sounded good. I’m looking for different voices I can incorporate – different melodic timbres and instruments I can use to complement the guitar. The tap-shoe thing happened after the kalimba. I ran out of hands trying to play the guitar and the kalimba simultaneously, but I still wanted a percussive thing. My feet were the only thing left, so I came up with tap shoes. I’m not a dancer at all (laughs).

Do you have a favorite guitar?
I have a custom Skytop that I love – the Grand Concert. It’s kinda funky-looking, but amazing. It has holes in the front and two large sound ports on the side. The woods are not what you typically see, but I love it. It’s my main guitar. I also have a Timberline T60HGHpc harp guitar. The Skytop is my main one, but I’m trying to use the harp more.

Any advice for aspiring guitarists?
Be yourself. Try to develop your playing voice as quickly as possible. It’s helped me a lot. Try not to follow specific guitarists you idolize too much. Don’t idolize anyone. When it’s your voice, you’re always going to sound better than if you imitate a specific person. Be yourself, because there’s only one you, so you may as well play you.