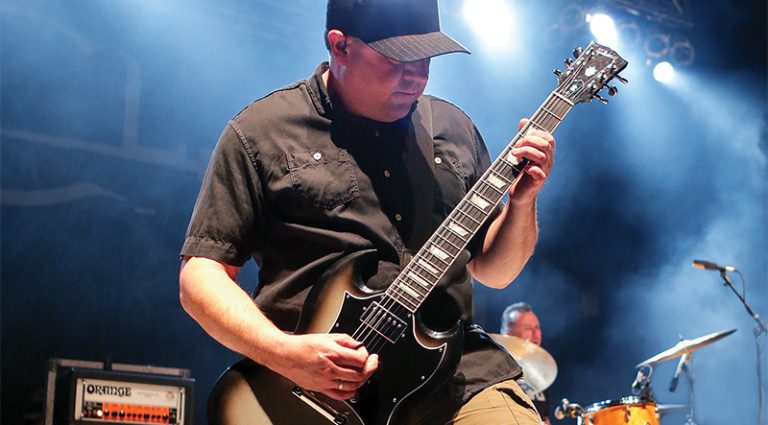 With a new Clutch recording, the listener always knows what lies in store – colossal riffing, valley-deep grooves, and manly-man vocals – and the band’s 11th studio album, Psychic Warfare, doesn’t disappoint. Comprised of Neil Fallon (vocals/guitar), Tim Sult (guitar), Dan Maines (bass), and Jean-Paul Gaster (drums/percussion), Clutch has been at it since 1991, succeeding on their own terms and for the last several years on their own label. VG spoke with Sult about gear – and the dangers of tuning below D.

This is the second consecutive Clutch album produced by Machine.
We enjoy working with him because we enjoy the final product. He has a lot of suggestions as far as arrangements go. We’ll sometimes beat up a riff or song so much that we completely hate it, but he’ll encourage us to keep it because it might still be a great part. And with this album, we did more production than in the past; we micromanaged every bar of every song before we went into the studio, where in the past, everything was a lot looser in the studio.

How did you get your guitar sounds in the studio this time around?
It was all my gear. We took a day to listen to all the amps I have. As for guitar sounds, when I started working with Machine on our fifth album, Pure Rock Fury, I thought it sounded a bit thinner than I was used to, but, over the years, my tone has gotten better and better. This time, we decided on a Marshall 800 and an old Fender Bassman, and we stuck with that for the whole album.

Which guitars did you use on Psychic Warfare?
Just one – a ’59 reissue Gary Rossington Les Paul that has a repaired headstock.

What kind of guitar tunings do you use for such a heavy sound?
Mostly standard E, but a couple of songs are in drop-D.

Do you ever use D, or anything below that.
Nope. I never feel like I’m in tune that low – it always sounds like a complete disaster. Drop D is the furthest I go and still enjoy myself.

Who were some of your top guitar influences?
When I started playing, my main influences were Randy Rhoads, Ritchie Blackmore, and Jimmy Page. I was really into Queen, as well. And then I got into Black Sabbath and a bit heavier metal when I was 15 or so. The first two songs I learned to play were “Foolin’” by Def Leppard and “We’re Not Gonna Take It” by Twisted Sister.

When Neil plays guitar, is it easy to make the two guitars fit?
Super easy. I have no problem navigating riffs around his bluesy parts – it’s one of my favorite things to do.

Clutch has a reputation for being one of the hardest touring rock bands?
We’ve done it consistently longer than a lot of bands. But, we divide work and home life pretty evenly these days, so it doesn’t feel like we’re out all the time. As far as being the hardest working band… Yes (laughs)!