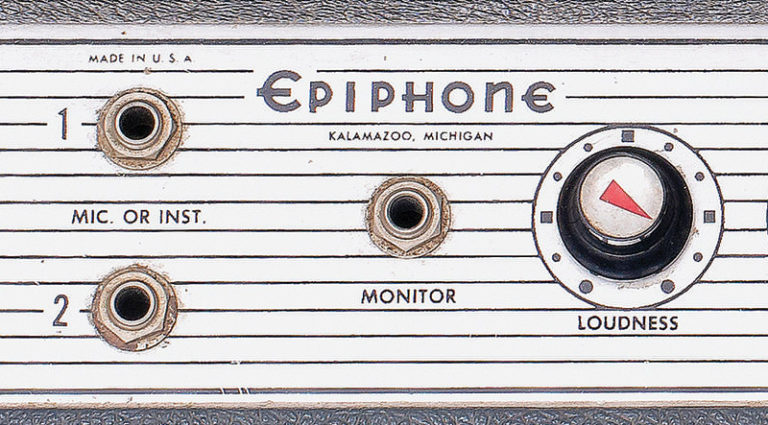 After giving the upstart Fender a run for its money in the amplifier department throughout the 1950s, Gibson segued into something that looked like surrender; by the early ’60s, its amps appeared to be afterthoughts or scattershot offerings to a rapidly evolving market. And while amps carrying the Epiphone badge were even more like outcasts, the off-center approach taken in designing some of them greatly enhances their quirky appeal.

Gibson’s parent company, Chicago Musical Instruments (CMI), acquired Epiphone in 1957, and soon after started turning out Gibson-like Epiphone guitars as a sister brand to help broaden the company’s reach. It didn’t do much with Epiphone amps until it began dabbling in a low-production run of combos circa 1959, which then evolved into the more-familiar models of the early/mid ’60s.

Many fans of Gibson amps would agree the company did its best work in the late ’50s and early ’60s – parallel to the golden age of the humbucker-loaded Les Paul. The line was already descending, with great ’50s amps like the GA-50 and GA-70 Country Western leaving the lineup just before flagships such as the GA-40 Les Paul combo and its brethren moved from two-tone (late ’50s) to tweed (1960), then departed the catalog in ’62. Still, plenty of great-sounding amps remained in the catalog, and Gibson pushed them vigorously through most of the decade. 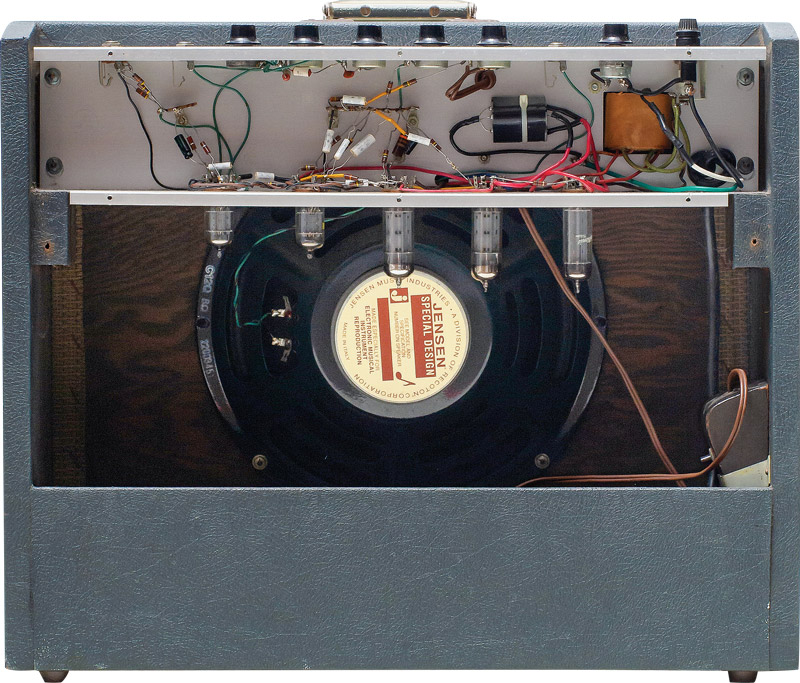 The B-list status of Epiphone amps of the day makes them conversely appealing, and their modest prices on the vintage market are no small part of that. They often present great-sounding bang for the buck, making them fun acquisitions for players and collectors who aren’t ready to wade into the two-tone and tweed pools of the ’50s. This ’63 Epiphone Devon Tremolo EA-35T is a good case in point.

Sister amp to the Gibson GA-18T Explorer (and sharing its circuit if not its look just yet), it’s a modest 10-watt 1×12″ combo that would have been firmly in the “student” category back in the day, yet sits in a very popular “crankable low-watt” bracket here in 2021. If anything (to reference the industry leader), the EA-35T was Kalamazoo’s competitor for the non-reverb rendition of Fender’s Princeton combo. But while the overall features might have stood it alongside that more-popular amp, being Gibson-made, things were done quite differently.

Rather than the 6V6GT output tubes that were standard for many U.S. makers of the day, the EA-35T carries a pair of the slim, nine-pin 6BQ5 tubes better known today by their British designation – EL84. Though we see these in amps generating 18 or 20 watts per pair, factors in this design and construction rein it in at around 10 watts; the modest power transformer and 6CA4 rectifier tube (a.k.a. EZ81) deliver only about 276 volts DC on the plates of the EL84s, compared to 415 volts DC in the blackface Princeton. A rather diminutive output transformer further restrains the effort.

Instead of the 12AX7s that were common to the majority of guitar-amp preamps by the early ’60s, the EA-35T uses a pair of 6EU7s for preamp, tremolo, and phase-inverter duties. The 6EU7 is a dual-triode like the 12AX7, and is similar in performance, but has different internal pin connections and uses a shared heater, so it’s definitely not a substitute (though there are plenty to be found and new examples are still being made in Russia and elsewhere). In any case, like its Fender archetype, the Epiphone sandwiches its Bass and Treble potentiometers between the first gain stage of the 6EU7 and the second (a gain make-up stage), yet its EQ network is configured quite differently.

Half of the second 6EU7 powers the tremolo circuit, which modulates the output stage by interfering with the connection to ground at the dual-220k resistor network between phase inverter and output tubes – a common application in amps of this size. The second half of that tube forms the cathodyne (a.k.a. split-load) phase inverter, as would be done in the Princeton once Fender fully moved from brownface to blackface specs. Unlike those amps, though, the EA-35T has a cathode-biased output stage, which further constricts its output potential but arguably sweetens its segue into distortion.

One feature of the EA-35T that’s potentially confusing without an owner’s manual or schematic to reference is the Monitor-output jack between the inputs and Loudness (volume) control. This taps the signal after the controls for the first gain stage have had their way with it, enabling connection to a PA or larger power amp. At the other end of the panel, the “Ext. Spkr.” jack is just that – an extension-speaker output conveniently placed so you don’t have to root around underneath to find it. Interestingly, this is labeled “Echo Spkr” on the EA-35T’s schematic, but it’s not worth getting too excited over. Yes, the speaker plugged into this might echo, but only if you place it at the other end of the empty gymnasium you’re playing.

A look inside the chassis further differentiates it from its market-leading rival; lacking the rugged circuit board of its competitor or most of its Gibson predecessors, it looks more like a Danelectro or Valco, with resistors and capacitors arranged pell-mell between tube sockets and top-panel components, with a couple of terminal strips for support. The use of budget ceramic-disc coupling capacitors also echoed the work of those makers, and enhances the slightly gritty nature of the amp while illustrating the circuit’s simplicity.

The EA-35T might not exude bountiful retro charm, yet it displays an understated, hip styling in its gray vinyl, wheat-colored grillecloth, and nifty Lucite-faced luggage handle. The top-mounted control panel is a short-lived transitional configuration between the tweed look of the ’62’s shorter top-mount panel and the angled top/front-mounted panel of the late ’63 and after, which finally attained the styling adopted by the GA-18T Explorer a couple years before. If anything, the latter – likely thought a stylish modernization – today looks even more dated than the EA-35T.

The speaker is a reissue Jensen ceramic replacement for the original Jensen Alnico, but it accurately presents the combo’s potential. Arguably more British-voiced than American (or perhaps a blend of the two), it’s clear and bright with just a little bite and texture at lower volumes. Wound up higher, it slides into easy breakup with a textured but not overly pronounced midrange, and a nice overall mix of chime and warmth. Fun stuff, and generally still easy to find for well under a grand.

The Leilani Lap Steel and Amplifier