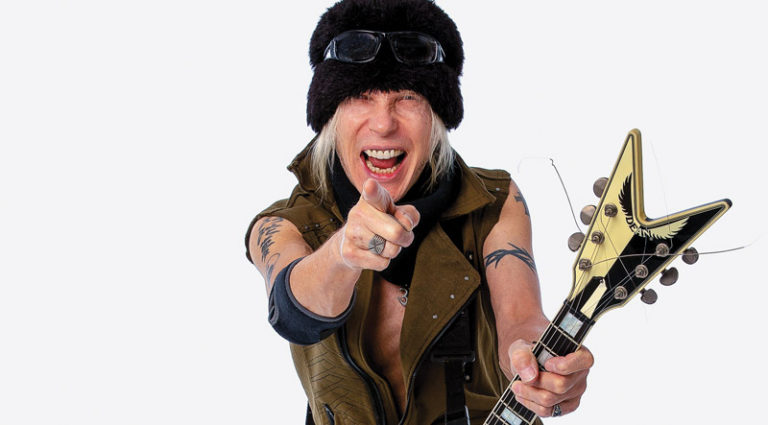 The lead-off track on Immortal, “Drilled to Kill,” features fierce guitar/keyboard interplay between you and Derek.
Brian Tichy – one of the best drummers in the world – heard about the 50th anniversary, and offered six drum tracks. He called [producer] Michael Voss and said, “A buddy of mine is also a Michael Schenker fan and wants to make a contribution… He’s a keyboard player – Derek Sherinian. I had put the guitar parts down myself to make the music [more personal], and I said to Michael, “What are we going to do with a heavy-duty keyboard player?” He said, “Why don’t you do a keyboard/guitar jam?” I’d never done that before. It was a fantastic idea! When I heard the end result, I was blown away.

And there’s a re-recording of the Scorpions’ “In Search of the Peace of Mind.”
That was the first note I ever put on a recording, the very first composition I ever wrote – in my mother’s kitchen with nobody there. The title became the theme of my life – looking for contentment, peace, freedom, fulfilment, etc. On top of that, there was a lead break I played on my very first recording, and I would never change a note – like “Stairway to Heaven” or “Theme for an Imaginary Western.” It’s complete. I asked myself, “Where did this lead break come from? I was only 15 years old!” On the rest of Lonesome Crow, you can hear that I’m an amateur, I’m developing. To this day, I can’t understand. And I wanted to make that song an epic 50th anniversary celebration – different than what I did before. I wanted to add a lot of guitar at the end. When I listened back, it sounded like an inner conversation, asking ourselves, “Should I go this way? Should I make this choice? That choice?” It sounded like questions and answers played on lead guitar.

Which guitars, amps, and effects did you use on Immortal?
It’s very straightforward – my JCM800 50-watt Marshall. This time, instead of having 15 guitars lying around in the studio, I wanted to use the very first Dean I ever got, which I use live for “Rock Bottom” because I always go on an adventure, and it’s always a suitable guitar for that solo. I decided, this time, to use that guitar as my main guitar. So I did… and a wah pedal; I’m so grateful for the Dimebag. It’s straight into the amplifier.

By the way, that amplifier – my original UFO amp – broke down in ’83/’84, and when I was looking for a new one, I eventually found the JCM800. Someone once told me, “Michael, did you know that you actually designed that amplifier?” I went, “What?!” He said, “Yes, you went to the factory in 1980 [to help design an amp] – invited by Jim Marshall – but you never completed it. The diagrams were there, and people put together that model.” No wonder I ended up with that bloody amplifier!

How did the recent passing of two of your bandmates in UFO, Paul Raymond and Pete Way, affect you?
Badly. And Leslie West. I got so upset. It’s a bit like, “Oh, dear Michael… time is coming. It won’t last forever.” It could be any time. But what I say is “I’ll see you in heaven.” I want to spread my wings when I leave and just go there. What else can you do? It’s upsetting when overnight, such close people die. It’s horrible. And it’s annoying and upsetting – makes me angry. That’s only based on my limited earthly understanding – but that’s all I have, consciously. So, I react that way.

How would you compare your guitar playing now to back in the ’70s and ’80s?
Right from the beginning to now, it’s a continuous development. I’m a kid in a sandbox – I just enjoy, discover, and play, play and discover. I don’t compete, I’ve never compared anything, I’ve never looked for fame, money, success. That all happened by itself, based on circumstances. Just the pure joy of putting three notes together and creating goose pimples – that’s my reward, that’s where I’m happy, and that’s what I do on a daily basis. I move forward on a daily basis. And I always look for, “What can I do that hasn’t been heard before?” Or something that has an impact emotionally on people and on myself. I’m very happy doing that – much more than chasing fame and instant gratification or being part of a trend.