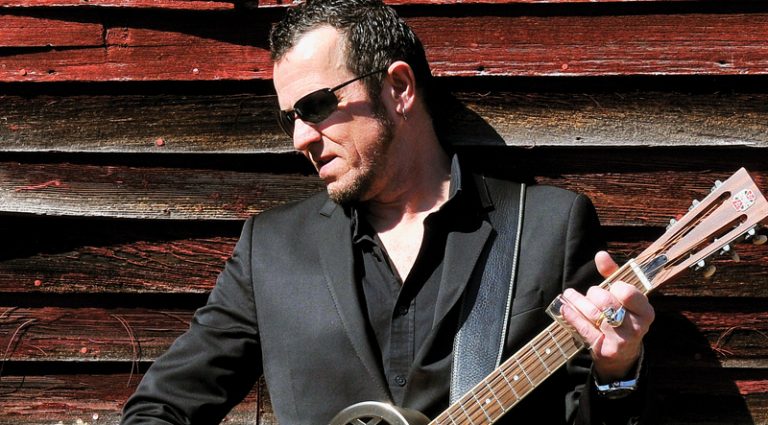 Successfully combining technique and emotion has been every artist’s great challenge, but Dust & Bones has a greater significance.

What made you decide to dig deeper into the blues?

It’s always been a dream of mine, doing the blues-rock thing, and for a long time it wasn’t in fashion. If you did blues, you were off in the corner somewhere.

I love all kinds of music, so I’d always done what felt right at the time – it made sense and I wanted to commit to this because it was something I could do for the next 20 years and feel good about getting up in the morning.

As an artist, if you play ’80s spandex rock or whatever and you want to do that forever, you can if it’s what you really want to do. There are still bands out there carrying the torch of what they’ve been known for. The Rolling Stones are so old, but they’re still doing it because their music is timeless. That’s what I want to do now. I want to create a lot of music that is classic blues that will live on.

Who are your major blues influences?

Playing with Johnny Winter was an inspiration, and I wanted to keep that sound alive. The song “Steamroller” was all about him. I felt the same way about Robin Trower, and wrote “This Time Tomorrow” and “Ghost Of Yesterday.” It’s definitely in the style of Trower because his thing was that the songs were long and fun, and they felt live even when they were recorded in the studio. Brian Setzer was the influence on “Who’s Your Daddy,” which is a fast swing. “Born To Love You” was my tribute to ZZ Top and that whole driving blues-rock sound.

B.B. King and Jeff Beck were big influences on me. “Boxcar Blues” starts off the album, which has a Robert Johnson “Cross Road Blues” sound. I used my Republic Highway 61 Resonator with heavy strings on it – .017 to .062. The band kicks in and it sounds like Led Zeppelin. I wanted to fuse the old school with the new school.

Is it harder to create a blues album than an instrumental rock record?

Yes, much harder. It’ll scare the pants off you if you have any respect for the blues; you’re taking on the blues when there’s people like Buddy Guy still out there. I’m also coming up with lyrics and songs with meaning. Giving an emotional performance within the blues is way harder.

I was also struggling with tones, so I just took my live rig and plugged it in. I used the same pedals I use on tour, recorded my actual effects, and it sounded better. The album had a better live-sound feel because of it.

What did you use?

I used my EVH 5150 III and a Vox Time Machine Delay. I have the most incredible flanger I’ve ever heard in my life – the Barracuda, by Toadworks. I have a Dunlop Crybaby wah, a Tube Screamer, and a pedal I created called the Skull Crusher, made by Homebrew Electronics. It’s like a power booster but gives more volume and compression. It’s my signature pedal and sounds really good on my dobro.

I also have a Custom Shop ’60s Relic Strat made by John Cruz, a Shoreline Gold ’97 Big Apple Strat, and a blue Strat with a lefty headstock that I use for drop-D tunings. I also used a ’78 Fender Super Reverb that I used on “Soul Surfer” and “Born To Love You,” and a 15-watt Vox head on “Who’s Your Daddy” for clean rhythms. Most of the tracks were done with my 5150.

We want to play a lot of shows behind this record. We’re getting good exposure in Europe. They love this album in the U.K. and Italy, so we’ll be touring there in the New Year. I’m also building a new website with a bunch of cool guitar lessons. I’m transcribing the whole album in tablature for a book, so people can play the songs. I have a 14-year-old son who loves the blues, so this is for him.