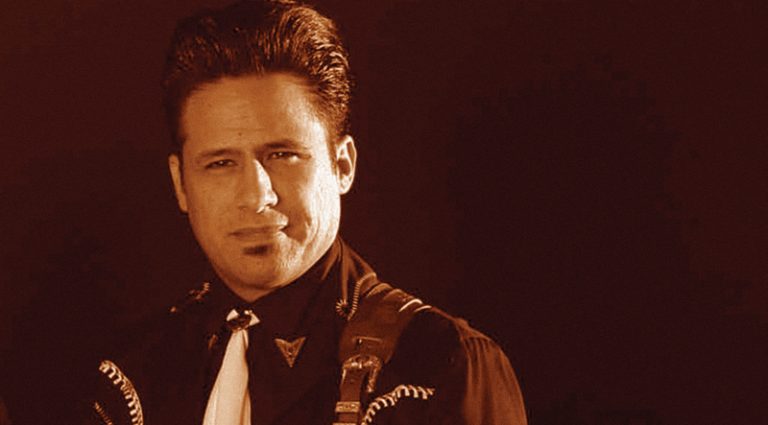 Call it twang with attitude. Ruby Dee and the Snakehandlers’ new album, Little Black Heart, is a heady mix of rockabilly, country, swing, and jump blues – all propelled by the stellar guitar picking of Jorge Harada.

The Austin-based four-piece launched in 2002, but its latest may also be their masterpiece – at least so far.

“We’re definitely not what most folks call traditional anything – whether that’s country or rockabilly or Western swing,” said band leader Ruby Dee Philippa. “We do riff off of all those traditional sounds, though, mixing a bit of this with a swinging rock-and-roll beat. It all depends on what the song tells me it wants to be.”

Their sound also moves smoothly between genres, powered by upright bass, drums, and Harada’s arsenal of Gretsch archtops and Teles. But the band isn’t hung up on a vintage vibe, explains Philippa.

“We don’t go the full distance with low-fi electronics that sound period-specific. We turn it on and crank it up, so there’s a definite nod to all the classic sounds combined with a more rockin’, in-your-face crispness I associate with modern sounds.”

And she applauds Harada’s blend of style.

In a recent talk with VG, Harada shared some of that mojo.

What are your major inspirations?

I think just about everything I’ve ever listened to has influenced me in some way. For guitar playing – Billy Zoom, Tony Gilkyson, and Dave Alvin during their tenures in X. The Beat Farmers and the Clash are big faves. It was through these bands that I discovered Gene Vincent and Eddie Cochran, Sun Records, rockabilly, country blues, and traditional country-western. I love Pete Anderson’s playing with Dwight Yoakam.

How did the album’s lead-off song, “Not For Long,” come together?

It was pretty organic. Ruby presented the lyrics and sang them to me with the melody line. It’s one of those songs where the entire thing is hinged together on a riff, playing along with the vocal. We tried different key signatures until we got one that sounded right in terms of the structure and her singing range, and we were off to the races! She really wanted a New Orleans rock-and-roll feel for the song. The sax on the recording really makes it.

Ditto for the title track?

“Little Black Heart” required more finesse. Ruby had the nucleus verse and chorus written; we recorded it onto the laptop so I could work on it. Eventually, I wrote a bridge that was a mini-song that split the song in two; Ruby put some lyrics on it, and it was a leadoff for the solo, which mimics the melody line. Dave Biller played some wonderful textures on the steel guitar that added depth.

What six-strings did you employ?

On “I See Green,” I used a Fender ’50s Classic with Lindy Fralin Stock Tele pickups and a Collins B-Bender. On “Camille,” the lead is a ’90s Danelectro U2 baritone reissue.

There’s also a ’80s Telecaster Custom with a Bigsby for different textures throughout the record. Since it has a Gibson ABR-1 bridge that doesn’t pivot, it has a meatier, darker tone than your average Tele.

Most of the acoustic tracks were done with a Martin D16RGT or D28.

And what about amplification?

We kept it pretty simple. I ran the guitar into the first input on the Normal channel of a Fender Deluxe Reverb reissue; the second input was connected to an Alamo with a 15″ speaker – can’t recall the amp model, but it sounded huge!

The signal between the guitar and the amp was processed through a Barber Gain Changer, Xotic RC Booster, Catalinbread Belle Epoch Tape Delay pedal, and Strymon Flint. I primarily used the RC Booster to “wake up” the amp. I play fairly clean: I mostly hang out in the “right after clean right before distorted” zone, which seems to record real well, has clarity, and doesn’t clash with the vocals. I always have some kind of low-gain overdrive engaged and vary the picking attack or roll off the Volume on the guitar to adjust for the different songs and sounds, and turn it up for solos.