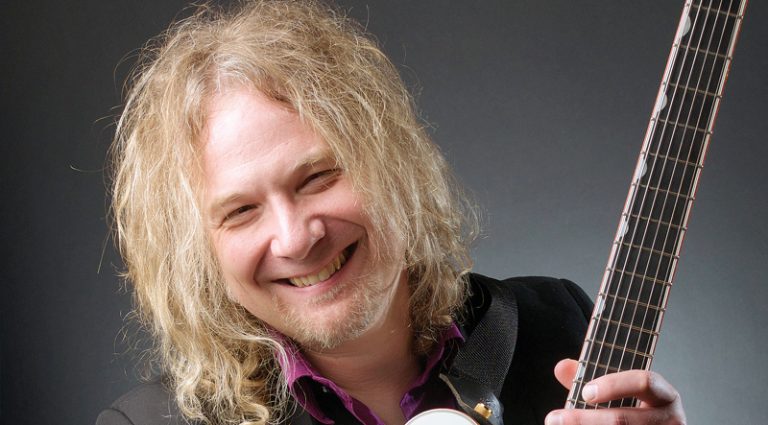 After five records with his glam-rock-inspired band Crash Street Kids, guitarist Ryan McKay has settled in with Louis Prima, Jr. and the Witnesses. Fronted by the son of a jazz legend, the band has a third album on the way – and McKay continually sharpening his jazz chops.

He landed the spot after an audition in Las Vegas.

“Louis wanted people who were comfortable jumping around onstage, but adept at jazz,” he said.

“I owned a Fender Twin, but needed a hollowbody, so I bought an Ibanez Artcore. After a while, Louis got a deal with Gretsch, so I now play a White Falcon. It’s gorgeous, and the pickups are perfect for the music. Out of the box, it was, ‘Oh, yeah. That tone!’ I got a Vox AC30 to accompany it.”

With effects, he believes less is more.

“I keep it simple – a Fulltone OCD and a Boss Tuner. With the AC30, I turn it up until it breaks up a bit, and that’s my rhythm tone. I use the OCD to boost solos and add a touch more gain for leads.”

Establishing a balance with the other players in the band is also essential to the sound.

“It’s a 10-piece, so we can get into serious traffic jams if we all try to fill the sonic space. So it’s okay to lay out on certain parts for the sake of dynamics.”

Of course, McKay’s parts are all about the swing.

“You have to really get that; I try to be dynamic with my right hand because Louis’ dad’s guitar players were real technicians when it comes to swinging. It’s that eighth-note rhythm where you push the offbeat as far to the right as you can – almost on top of the next downbeat – and swing as hard as you can.

“The first record, Return of the Wildest, is Louis’ dad’s material, and I was still using the Ibanez. After touring, the label asked if we could write, so a few of us wrote what would become the second record, Blow. By the time we got to the studio, I had my Gretsch and the AC30. I also used a Glasswerks Overdrive Deluxe amp and I kept a Les Paul around. There was one track, ‘Fame and Glory,’ that was perfect for a big Gibson rock solo.

“It wasn’t lost on us that we were recording at Capital Records, where Louis’ dad recorded a lot of his famous material. His picture hangs in the hallway and we put it in Studio B with us, where he recorded “Jump, Jive and Wail” and “Just a Gigolo.” There was some magic in that studio.”

“Greg Chaisson and I have a project with Michael Beck, called Kings of Dust. We recorded an album’s worth of material but went on break because Greg was battling cancer. Everyone kept writing and now that Greg’s got a clean bill of health, we’re hoping for a fall ’17 release. The music is heavy rock like Deep Purple and Black Sabbath, and it’s a chance for me to stretch as a player.”