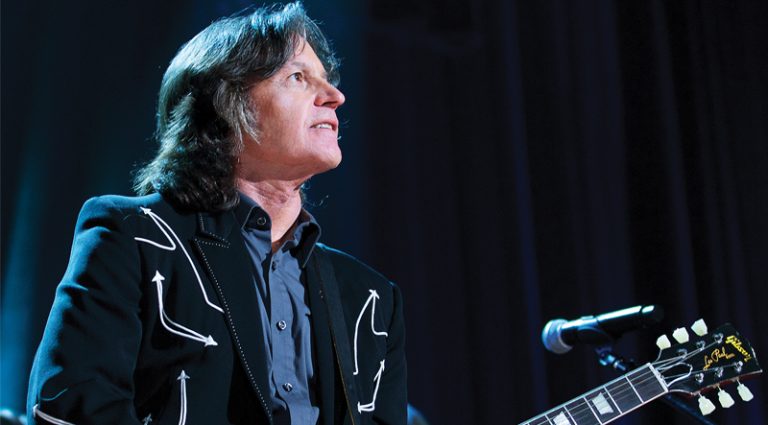 Equal parts anniversary party, all-star jam, and “you really needed to be there” celebration, a September ’15 performance by the Nitty Gritty Dirt Band at the Ryman Auditorium kicked off the group’s 50th year of existence and featured reworked arrangements of its classic songs abetted by special guests including Vince Gill and Alison Krauss along with songwriters who had long been the band’s own heroes.

Assisting were steel/dobro icon Jerry Douglas, multi-instrumentalist Sam Bush, and bassist Byron House. “They’ve been an extended part of our band whenever we could get ’em,” Hanna said. “They have great careers in their own right, but they’re also great friends.”

Hanna has an impressive vintage guitar collection, but tends to use reissues onstage.

“As much as I dearly love my old guitars, subjecting them to the rigors of the road is not a very good idea,” he said. His primary electric at the Ryman was a reissue Gretsch Duo-Jet with hump-block fret markers and a Gretsch Bigsby. The guitar has a reissue DeArmond pickup in the neck position and a TV Jones pickup at the bridge.

“I love the Bigsby,” he enthused. “I use it every chance I get. I love that sound; it’s like nothing else.” 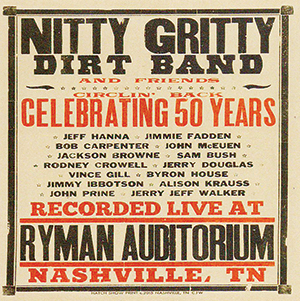 His acoustic was a limited-edition Gibson Advance Jumbo Concert.

“It has pre-war appointments and a thinner body,” he detailed. “It’s a great guitar and my favorite stage Gibson. I’ve been playing modern Gibsons on the road for a long time.”

Late in the concert, Hanna played a figured-top Gibson Les Paul Standard Collector’s Choice Series #33 Jeff Hanna model from the Custom Shop. “They cloned my ’60 sunburst, and it looks like the real thing and plays great,” he said. “I think the level of instrument building, right now, is at an all-time high among the American builders, and the Japanese,” he said. “Fender, Gibson, and Gretsch are making fantastic instruments.”

Hanna also used a Strat at the Ryman.

“That one’s kind of odd,” he chuckled. “It’s a ’62 reissue in Olympic White with a ’89 neck from my first ’62 reissue. It has Samarium Cobalt pickups and a Hip Shot drop-D tuner. It sounds like an early-’60s model.”

“John Prine was playing a new Martin D-41, and Jerry Jeff was playing my Gibson Woody Guthrie model,” he noted.

A consummate musician, Hanna is rightly proud of the concert.

“Everybody brought something great. We’d worked so hard that we were somewhat tired when we hit the stage, but the energy from that crowd had us levitating!”