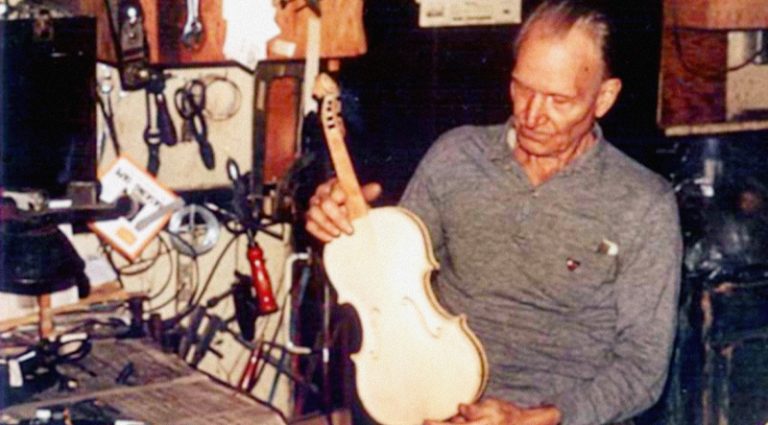 “Art for art’s sake.” The expression is common. But how often is it practiced?

In a basement studio on Chicago’s North Side, Carl Johnson epitomized the maxim while building archtop guitars bearing the Albanus brand from the 1950s until the ’70s. Rather than seek fame or fortune, Johnson was content to live modestly and draw pleasure watching people play his instruments, including professionals Fred Rundquist, Johnny Gray, Pat Ferreri, Ron Steele, Jack Cecchini, Bobby Roberts, Earl Backus, and Dick Curtis.

Today, many compare the sound and quality of Johnson’s guitars to those of D’Angelico, yet little is known of his life or craftsmanship.

Born Carl Albanus Johannson on December 18, 1892, his family lived in Fjallbacka, a fishing village in Sweden. Known for its herring industry, a periodic shortage may have caused the family to move inland to Barfendal by the time Carl’s last sibling was born in 1900.

Between 1910 and 1922, Johnson immigrated to the United States and settled in Akron, Ohio. On October 2, 1923, he married Maria Therese Kjellson. Their marriage license says Carl was employed by Mason Tire and Rubber.

The ensuing six years included a move to Chicago and the birth of a son, Werner. As a sideline, Johnson played violin at Swedish dinner dances, which is how he met a young Fred Rundquist. Life was uneventful for the young family until Maria contracted tuberculosis and had to be committed to the Chicago Municipal Tuberculosis Sanitarium. After several years of confinement, she passed away March 30, 1932.

With the advent of the Great Depression, Johnson struggled to maintain steady employment. With little work available, he sent his young son to Sweden, where he then lived with Johnson’s sister. Carl did not see the boy again until he traveled to Sweden in 1969.

As the country entered a new decade, Johnson continued to struggle to make a living. The 1940 census lists him as a lodger in a house on Beacon Street, in Chicago, his occupation, “Machinist.” He was employed for just 21 weeks in ’39.

A draft-registration card issued in ’42 indicates Johnson resided on Malden Street and was once again unemployed. Most interesting, though, is that in the field labeled “Name and Address of a Person Who Will Always Know Your Address,” Johnson wrote, “Mr. C. Rundquist, 2031 Wilson,” indicative of the bond between Johnson and the family of Fred Rundquist.

It’s not clear what Johnson did for a living from the mid 1940s until the mid ’50s, though a clue may be found in a March ’88 interview in Archtop magazine by Martin Taylor with Carl’s friend, professional guitarist/luthier Bill Barker (1924-1991). In the feature, Barker said Johnson “…never did luthiery on a full-time basis – he was actually a maintenance machinist with one of the railroads.” Prior to 1950, though, Johnson began constructing violins, violas, and cellos – primarily student-grade instruments sold directly or through local shops. One person who purchased several for students was Karl Fruh, a cellist and teacher.

Around this time, Johnson moved to 1909 Wilson Avenue, the address that would serve as his home and workplace for the rest of his life. A basement apartment, it consisted of a bathroom and one other room that served as workshop, kitchen, and bedroom.

By the early ’50s, Rundquist, then an NBC staff musician and member of the Art Van Damme quintet, was bringing his guitars for Johnson to repair; through the years, Rundquist owned multiple Gibson, D’Angelico, and Stromberg archtops, which gave Johnson the opportunity to observe differences in design and construction.

One enduring myth is that Johnson learned archtop guitar construction from Charles and Elmer Stromberg at their shop in Boston. This has been commonly surmised in part because all three were of Swedish descent and because Johnson used a single diagonal brace to support the top plate in some of his guitars. To date, though, no evidence suggests there was anyone other than Elmer and Charles working at the Stromberg shop in the ’50s. This was confirmed by the late guitarist Chet Krolewicz, a close friend of Elmer who recalled Johnson’s name coming up in e-mail correspondence with Stromberg expert Jim Speros.

Prior to his death in 2009, Rundquist corresponded with Speros about a Stromberg Deluxe he purchased from Hank Garland in 1953/’54. It had a short scale, and Rundquist asked Elmer to build a long-scale neck and send it to Johnson. Elmer communicated with him about its installation (Stromberg did not use glue to attach necks, preferring instead a very tight joint). One can speculate this work would have provided Johnson the opportunity to study Stromberg’s work in-depth (bracing, carving, etc.) and ask sufficient questions.

Though it’s not known exactly when Johnson began to build archtops, it happened prior to mid 1955 thanks to encouragement from Rundquist and guitar teacher George Allen, who pointed out a need for such professional-grade instruments in Chicago. Guitarist Art Ormaniec ordered one at that time, likely having heard about Johnson from Ron Steele, one of Allen’s students. Ormaniec received the guitar in early ’56, shortly before joining Tommy Alexander’s big band for a tour of the South and Midwest. On the evening of May 20, Ormaniec was a passenger in a car (driven by Alexander) that was in an accident outside of Berlin Heights, Ohio. Seriously injured, Ormaniec was confined to Sandusky Memorial Hospital for several days; the accident and his discharge were reported in the Sandusky Register Star-News on May 21 and 25, respectively. Ormaniec’s guitar sustained a split in the top and was repaired by Johnson.

In 1957, guitarist Pat Ferreri took a job as staff musician for the ABC television affiliate in Chicago and needed a top-quality archtop. As luck would have it, Ferreri was also a student of Allen, who had recently taken delivery of an Albanus cutaway archtop and offered his non-cutaway Albanus to Ferreri. According to Allen, the non-cut was the second archtop made by Johnson and originally shared the deep-red finish on Ormaniec’s guitar (and no other Albanus uncovered to date); Johnson disliked the color and asked Ferreri to let him refinish the instrument in sunburst.

Ormaniec’s awareness of Albanus guitars meant at least one was already in circulation. Considering the time it takes to construct an archtop, Johnson probably started building Allen’s first one prior to ’55. Therefore, a best guess is that Johnson completed his first guitar in ’54.

Thanks to the quality of workmanship, materials, and the style, by the late ’50s, word-of-mouth demand for Albanus archtops had increased to an extent that Johnson had more than enough work to occupy his time. He used solid-wood bodies and hand-carved tops and backs (typically, cello sets). Though he offered a floating pickup, his guitars were primarily built to be played without amplification.

Despite having little spare time, Johnson imparted his knowledge to several people, the most well-known being Barker, who was looking for an alternative to life on the road. Barker lived in Toledo and began making weekly visits to Johnson’s shop, where he would take pictures, make drawings, copy tools, and use certain pieces of Johnson’s equipment. The only restriction was that Barker could not look over Johnson’s shoulder while he was working. After months of “bugging him out of his mind,” Barker learned enough to begin making jigs and templates of his own designs. Circa ’61, he built his first guitar.

Johnson continued to make guitars into the ’70s. In ’74, he was diagnosed with chronic pancreatitis which over the next two years evolved into cancer. By September of ’76, the cancer had spread to other parts of his body. It’s not known when Johnson’s final build was completed, but he was still taking in work as late as October, when he returned a questionnaire to Susan Caust Farrell for her book, Directory of Contemporary American Musical Instrument Makers.

On June 9, 1977, Johnson passed away after a short stay at St. Francis Hospital, in Evanston. Barker estimated Johnson built approximately 75 guitars during his lifetime.

Albanus guitars are many things. One they are not is cookie-cutter.

Billy Cook, who apprenticed with Barker and now operates Cook Guitars, has seen a lot of Albanus guitars and speculates Johnson used few templates. In fact, based on instruments tracked down to date, it appears Johnson was highly experimental. His top-bracing patterns include parallel, X, and a single diagonal brace similar to later Strombergs. Scale lengths range from 24″ to a 26½”, lower bouts from 17″ to 18″, and body depth from 31⁄8” to 33⁄8“.

Some guitars were designed to accommodate the playing style of the owner. When he visited the shop, Ferreri would often play for Johnson. Johnson was impressed by how Ferreri used the full range of the instrument, and wanted to build one pitch-tuned to fit him. If a player focused on chord voicings using the lower strings (a la Freddie Green), Johnson would build the guitar to resonate at the note G. If the person played in a more-modern style focused on higher chord voicings, it would resonate at the note A. In Ferreri’s case, Johnson adjusted the pitch midway between, and the resultant guitar served as his primary instrument until it was stolen several years later.

Johnson’s experimentation was not limited to body design. His earliest employed a standard Kluson trapeze-style tailpiece, but by ’56 he’d designed a one-piece unit with four cutouts and an X-shaped center. In ’57, he introduced a violin-style tailpiece consisting of an ebony or rosewood façade with a brass inset. The inset extended beyond the façade and attached to the body. Each string passed through an opening in the wood, but the ball-end secured against the metal portion. In addition to aesthetic appeal, the wood eliminated sympathetic vibration of the strings.

On some guitars, Johnson installed hand-made tuning machines. Employing his machinist skills, he used a friend’s shop to construct brass tuners he installed in place of the Kluson Sealfasts on some models. His have an engraved A on the back of the gear box and buttons with curved edges. Their ratio is equal to or higher than the Klusons.

In addition to violin-family instruments and archtop guitars, Johnson made at least two mandolins, for guitarists Earl Backus and Jack Cecchini. The instruments have 10 strings tuned like the first five of the guitar, making for an easy transition.

Dating an Albanus guitar is not simple because chronological markings are almost nonexistent. At least one has a label with the Albanus name. Written in ink is the year (1957), the original owner’s name (Johnny Gray), and a serial number (111) that does not appear to have chronological significance. It may have been included strictly to identify the instrument in case it was stolen. The only way to date most Albanus guitars is by finish, hardware, and headstock design. The earliest were Cherry Red and used a Kluson tailpiece and tuners. Also, the top of the headstock was contoured similar to a pre-1940 Gibson archtop. By ’56, Johnson’s guitars retained the red finish, but had his first hand-made (all-metal) tailpiece and the headstock top was shaped in a descending curve bisected with a single cusp (this pattern was used at least through the ’60s, perhaps later).

In ’56, Johnson began applying a sunburst finish and in ’57 he began using the violin-style tailpiece. For at least the next five years, he made no significant changes to his instruments; Pat Ferreri’s guitar from ’62 stands in testament. However, by ’65, the original Albanus logo in block print and five-point star on the headstock had been replaced by a cursive version of the logo and a diamond inlay. By ’69, the diamond inlay had been replaced with a fleur-de-lis, and by ’73 the headstock had a broken scroll pediment with two inlaid stars.

James Leckinger is a guitarist and bassist from Lebanon, New Jersey, who is especially interested in jazz of the 1940s and ’50s.
He can reached at jwl5710@gmail.com. This feature is dedicated to the memory of Dick Curtis.