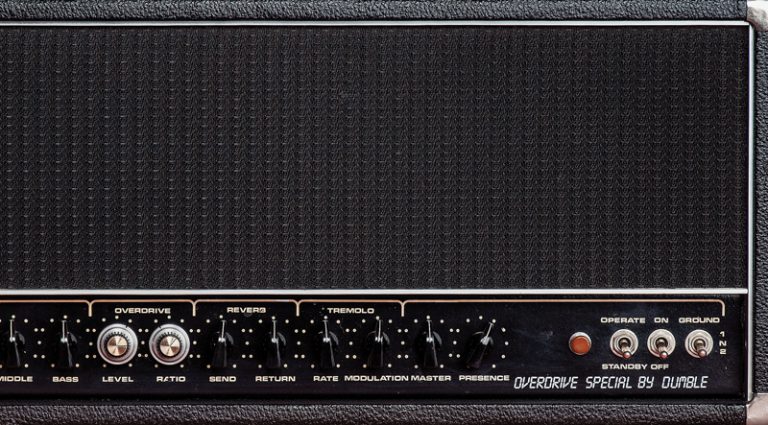 Alexander Dumble’s creations were already established as legendary when we probed our first example in this space back in May of 2011. Since that time, however, Dumbles have become the hot ticket for cloners on the boutique scene, and originals are perhaps the hottest amps on the vintage market. The difference in price between used Dumbles and vintage Fenders, Voxes, and Marshalls? Oh, about 10x… or more.

While all Dumbles are prized, the real peaches are those with solid provenance and an intriguing back story – and few are more enticing than this ’80s Overdrive Special.

Dubbed by its creator as the Overdrive Special OD150 WR, it was one of a pair (yea, two identical Dumble heads) built along with four 2×12″ cabinets with ElectroVoice EVM12L speakers ordered by ace studio and touring guitarist Todd Sharp.

Now a respected Nashville amp tech and builder/marketer of hand-wired amps (see his “Builder Profile” in the November ’16 issue), back in the ’70s and early ’80s he was a hard-working road warrior backing Hall & Oates, Christine McVie and Mick Fleetwood, Rod Stewart, and Delbert McClinton, among many others. Flush with gig money, he set out to assemble an amazing tone rig.

After playing the amp onstage and in the studio, including notable tours with Rod Stewart from 1989 through ’91, Sharp decided he didn’t need two massive Dumbles after all, and sold this one. In a cruel twist, soon after, its partner was stolen.

Any Dumble amp is a formidable beast, but this is a particularly complex creation. The amp generates 150 watts from a quartet of 6550 (or KT88) output tubes and a set of massive transformers. Along with a rendition of the maker’s classic input and EQ stages, there’s a tweaked version of his overdrive circuit, reverb with controls for Send and Return, and onboard tremolo (a Dumble rarity). Its clean tones have been described as a combination of Steel String Singer and Dumbleland, and its sophisticated overdrive employs a 12DW7/7247 dual-triode. The stage includes two dual-concentric pots (modified by Dumble from a four-knob OD that had two pots on the front panel and two on the back), including a Trigger control to adjust how much signal is fed to one side of the triode, a Level control to adjust how much is sent to the other triode, a Taper control to adjust the scale of the high frequencies, and a Ratio knob to determine how much overdrive is blended back in from previous preamp stages.

The amp’s tremolo (another unusual feature for Dumble) has a broad range that works with the reverb – the same two-knob circuit often used on Steel String Singer models to add lush, hypnotic effects to an already harmonically rich tone. On the back panel is a 150W/75W (i.e. half-power) switch along with more rare touches like bias-test and adjustment points for the output tubes. The four-knob footswitch selects on/off for each of the effects, plus Overdrive and Preamp Boost.

“I first played a Dumble at The Alley rehearsal studio in North Hollywood while rehearsing with Mick Fleetwood in 1981 or ’82,” Sharp recalled. “Alexander had left the amp there for me to try, and it blew me away at first touch – never heard anything like it; the overdrive was thick, rich, and delicious. Aside from Mesa, no one at that time was paying a great amount of attention to building an amplifier with onboard tube overdrive. But above all, that was what Dumble did better than anyone. Fair to say, its [clean] channel was also quite good – very clean, tight, bedrock-solid, and fairly Fenderish in character, but much bigger.

“I offered to buy the amp, but it was spoken for by David Lindley, I think. So, I put down a deposit and ordered two very much the same except I wanted reverb, tremolo, and the bias test points at the rear panel.”

Sharp used his Dumbles in the studio with a handful of artists, as well as on his own self-titled 1986 album for MCA, but recalls there was only one setting in which he really got to wind them up.

“I joined Rod Stewart’s band in 1989 and I remember the first day of rehearsal – Tony Brock hit his snare drum once and it nearly blew me over a few feet coming out of the side-fill monitor. I looked at Davey Bryson, the monitor mixer, and he just grinned back, then, in his thick Glaswegian drawl, said something like, ‘Welcome to the loudest f’ing band in the world, mate.’ I’d brought my Fender Dual Professional and Vox AC30 thinking they’d do the trick. Second rehearsal, though, I had both Dumbles and plugged them into some white-painted Marshall 4×12″ cabs – everything on Rod’s stage had to be white – and in short order took care of the volume disparity. That was really the only band I ever played with where my Dumbles fit, power-wise,” Sharp said.

However formidable the amp’s power, its current owner (who prefers to remain anonymous) finds pleasure in its exalted tone.

“I’ve owned the amp for two years and play it almost every day. My routine is to play for an hour before work, always through this amp; the connection puts me in a great place to experience the day. I consider it a piece of art that I can interact with, explore, and enjoy. I’m grateful to own it.”