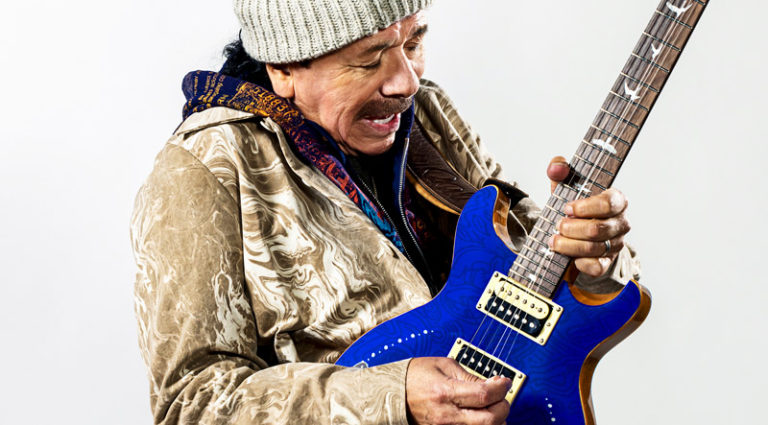 Carlos Santana’s creative drive is obsessive, restless – and relentless. For his latest album, Blessings and Miracles, he pooled the cosmic energy of his wife (renowned drummer Cindy Blackman Santana), son and daughter, and a short list of superstar guest artists.

Blessings and Miracles is an extension of the 2019 album, Africa Speaks; in 10 hyper-creative days during those sessions, Santana recorded 49 songs with producer Rick Rubin and Guinean singer Buika. Obviously, good stuff had to be left on the table, so when the pandemic nixed a 2020 tour, his focus turned to the unused tracks.

“It all happened very organically,” Santana noted. “With Africa Speaks, there wasn’t a single within 500 miles, because that wasn’t the purpose. This time, I wanted to do the opposite – reach the four corners of the world and touch a lot of people’s hearts again, like [1999’s] Supernatural. So we ventured, with our intentionality, to create a radio-friendly, guided music purpose.”

Deciding who to invite was a combination of Santana’s personal wish list and advice from band members, family, and his record company.

“I wanted a think tank. I said, ‘I want to get back on the radio. Give me the names of those who have their finger on the pulse right now.’ Chris Stapleton was one of the main ones. I said, ‘Let’s call his manager and find out if Chris will have eyes to write a song with us or for us.’ He called, and asked, with specificity, ‘What kind of music do you want to do?’ I said, ‘I want to create music like Bob Marley – mystical medicine music to heal, and alleviate a twisted, crooked world infected with fear and darkness.’ He was like, ‘Oh, that way.’ I said, ‘Yeah.’ He said, ‘I’ll get back to you.’ After a long conversation, he took elements from that and sent a song, ‘Joy,’ which is the opposite of fear.”

“I was in the studio with Narada Michael Walden, doing the basic tracks of (Procol Harum’s) ‘A Whiter Shade of Pale’ for Steve Winwood, and he says, ‘Hey, a good friend of mine, Diane Warren, is an incredible writer. She wrote a song and wants to know if you want to play on it.’ She sent it, and it was the Ally Brooke song, ‘Break.’ I added my guitar and she liked it so much she sent me another one, with G-Eazy, called ‘She’s Fire.’”

Three of the songs were recorded with Rubin before they’d welcomed Buika for the Africa Speaks sessions – “America for Sale” (with Hammett and Death Angel vocalist Mark Osegueda), “Peace Power” (with Glover), and “Mother Yes” (with Santana-band singer Tommy Anthony). And while Blessings features artists from across the musical world, Santana doesn’t assign definitions; Hammett comes from heavy metal, Stapleton from country. To Santana, it’s all just music.

“For example, Jimi Hendrix, Cream, Led Zeppelin, and Metallica is high-energy music they call heavy metal. Before that, it was (Fleetwood Mac’s) Peter Green doing ‘The Green Manalishi’ or ‘Oh Well,’ or Ritchie Valens. Again, I just look at the frequency energy. That way, I don’t have to think about it. You shouldn’t think about it. If you think about it, then it’s not music. I don’t think like that. In fact, I don’t think at all. I just feel.”

“It’s funny. I was listening to a song that kept showing up [in my playlist] and I thought, ‘That is really haunting. I wonder who it is?’ I thought it was some group from Europe or something. When it showed up again, I Shazam’d it and my son’s face appeared! ‘Oh my God! This is Salvador!’ He wrote ‘Rumbalero’ with Asdru Sierra, from Ozomatli. So, I called and said, ‘Hey man, I can’t stop playing your song. Would you mind if I put my band in it and put it on my album?’ He goes, ‘Are you serious?!’ I said, ‘Of course!’

“The same thing happened with Stella. She sent a song and I played it 20 times in a row; it sounded like a soundtrack for a (James Bond) movie or being in Switzerland at 5 o’clock in the morning. I said, ‘Sweetheart, I can’t stop playing your song. It’s incredible. Do you mind if I play guitar on it and put it on my album?’

Another high point was working with Corea on “All Together.” The iconic jazz pianist died in early ’21. Though they’d crossed paths, they had never recorded together.

“I jammed with him one time in Houston when he was with Return to Forever, with Lenny White and Al Di Meola. We talked about (recording) every year, believe it or not. Every year. As soon as he wrote the song and sent it, he left. He transcended. That’s his wife, Gail, at the beginning of ‘Angel Choir.’ I’m very, very blessed. The last song that my brother, Chick – supreme genius – wrote, he sent it to us, and we played on it. Somehow, it sounds like Mongo Santamaría and Cal Tjader and Willie Bobo – with Santana playing guitar.”

Fans of “classic rock” will love the very idea of Santana working with Winwood on “A Whiter Shade of Pale.” Santana believes no combination of musicians should be considered too strange or off limits, even if they outwardly seem mismatched.

“I’m planning an album with Andrea Bocelli,” he said. “The song I want to do with him is Otis Redding’s ‘Try a Little Tenderness.’ Nobody would think ‘Andrea Bocelli and Santana.’ But yeah! Who would have thought to do ‘A Whiter Shade of Pale’ with Steve Winwood and Santana and make it a sexy African/Cuban/Puerto Rican thing? To me, it’s just a matter of respecting and honoring your vision and going for it. Don’t let anybody tell you what you can and cannot do.

“The main thing for an artist is to not let your fans tell you what you should be. Some people want me to repeat Caravanserai or Welcome or Abraxas, and I’m like, ‘Dude, I’m not a Xerox machine. I have to do something different.’ Whether it’s a blessing or a curse, like Miles Davis. Some people got upset when I did ‘While My Guitar Gently Weeps’ with India Arie because they stamp their existence on a certain way they fell in love at that moment. I’m not one of them. I respect and honor it, but I’m into transcending and ascending and expanding. I don’t let nobody with a limited mind tell me how I should be. I wasn’t born to please you. I was born to please God and my spirit. They want to frame me. I’m not a picture to be framed. I’m too vast for somebody to define who I should be. I don’t do that to nobody, so don’t do it to me.”

Have past creative partnerships deepened his appreciation for certain music?
“You know how when you’re driving the car and you’ve got three mirrors – the rearview, the left, and the right? Sometimes I look at music like that, whether it’s heavy metal or country or jazz or whatever. But it’s the same road! The destination is the same.

“It’s funny, because I know this (interview) is about guitars, but I love injecting in conversations that heaven and happiness is a choice, not a condition or a destination. The greatest solo from Paco de Lucía or anybody is when that solo is not with time and gravity anymore. It’s outside of time. Like Jimi Hendrix on ‘All Along the Watchtower.’ That solo is outside of time. Same thing for Bob Marley or Bob Dylan. When an artist knows how to intuitively go there, to actually induce, activate, and ignite that frequency where you’re outside of time and outside of gravity, you’re a bad mother-you-know-what.”

For the entirety of Blessings, Santana played the gold-leaf-covered PRS he has used for nearly 10 years, plugged into amps by Dumble and Bludotone, along with an Allston (Neuro, a four-6L6/100-watt head with reverb and Master Volume running through a Tyrant Dictator 4×12 with Weber Gray Wolf speakers).

Circling back to the guitar, Santana extends encouragement to its human element.

“It’s important for guitar players out there to understand – my brothers and sisters – that if you submit your intentionality, some people call it a prayer to God, sweet baby Jesus, the universe, or divine intelligence – whatever you want to call it, it doesn’t matter. Submit your request then rest assured an avalanche of abundance of blessings and miracles in synchronicity is going to happen. Just like it happened to me with Bill Graham and Clive Davis, on Supernatural, and now with Blessings and Miracles.”