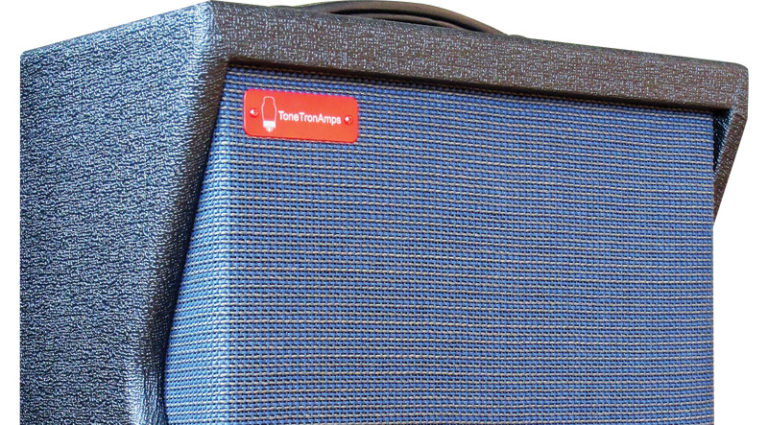 Small amps are big. As venues become increasingly intimate and amplifiers are miked through sound systems rather than muscling-up to broadcast across a full room, you no longer need to schlep a stack. In fact, some shops report having a tough time selling amps with more than 35 watts of sonic oomph.

All of that is good news for tone, as small can be beautiful – and your significant other, neighbors, and back will all thank you. One option in this segment is the ToneTron Billy-Rocker 10.

Established in 2006, ToneTron amps are hand-built by Jeffrey Falla, who customizes to each buyer’s taste and requirements while producing 10 to 20 amps each year. Falla engineered the BR10 to be similar in size to the beloved Fender Princeton but with more depth of tone – mainly the ability to deliver tight, thick low, creamy mids, and chimey highs. This little fellow uses a pair of cathode-biased 6V6 output tubes and cranks out 10 to 12 watts through a 10″ Weber Ferromax speaker.

The Smooth/Full control is key here. In Smooth, the overall power is slightly reduced and the tone has a smoother, better-defined clarity. In Full, the harmonics bloom and the tonal clarity opens, along with a bump in overall power.

Falla’s overarching goal was versatility; he sought to build a small amp that could excel in a variety of settings. At the same time, he wanted to ensure that the little guy sounded large.

We plugged in a ’52-reissue Telecaster and the Billy-Rocker sang pure rock-and-roll tones. It can play clean and it can do dirty, thanks to an amazingly sensitive response to attack. The amp is articulate, offering clarity and sweet chordal sounds. Hit it hard and the overdrive is heavenly.

The BR10 is housed in Falla’s unique cab and baffle design, which looks cool and offers tonal pluses including enhanced bass response. It’s available in either red or blue detailed grillecloth and knobs.