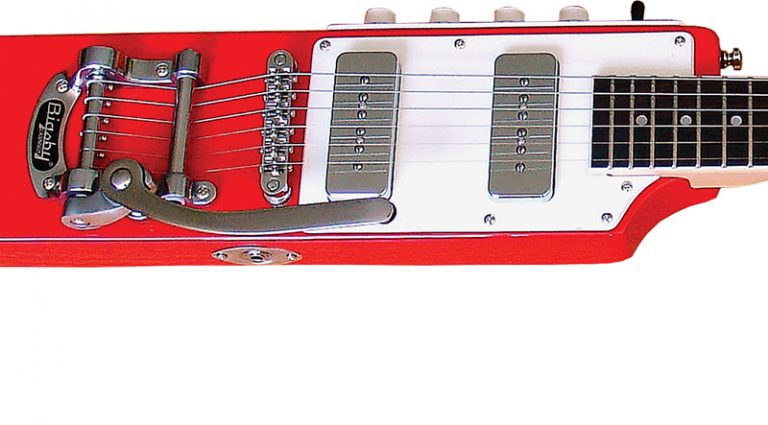 For decades, guitarists have lovingly referred to their solidbody guitars as “planks.” In the mid ’60s, a small builder called LaBaye upped the ante by offering a guitar truly was a plank.

The La Baye 2×4 Six was a minimalist guitar offered as a cheapo, and in the ’70s found notoriety in the hands of Devo guitarist Bob Mothersbaugh (a.k.a. Bob 1). Only 45 were made, and as a result they’re now quite collectible, commanding somewhere near $2,500.

More recently, Eastwood revived the 2×4 as an affordable import with a few minor modifications.

The La Baye 2×4 Devo Signature is a simple rock-and-roll machine with a radical body shape. Available in black, red, and natural, its body is basswood with a natural bolt-on maple neck and rosewood fingerboard. Look for 22 frets and dot inlays on the board, with an overall scale of 24.75″ and a nut width of 1.625″.

The guitar makes a potent visual statement; our tester was decked out in hot red with a white pickguard and chrome hardware, much like a ’50s or early-’60s hot rod. It sported a Bigsby B-50 roller vibrato bridge, though a stop-tail version is also available (as is a four-string bass). Two Eastwood Custom High-Output P-90s with chrome covers are matched with a three-position selector and master Tone and Volume pickup controls (with top-hat knobs) mounted atop the guitar’s plank body. Gotoh vintage-style chrome tuners grace its attractive headstock.

Plugged in, the La Baye 2×4 is a fun little beast. The pickups and body material make for a snappy tone that could handle any rockin’ ideas we threw at it. The neck is very comfortable – full C shape with a vintage vibe, with a fast setup for modern playability. Of course, this Eastwood is a true stage guitar, with a visual impact just meant for live work. Conversely, the guitar is not designed to be played on the lap; even standing up you’ll have to get used to not having that upper bout on which to rest your picking arm.

In all, the La Baye 2×4 plays well and looks great. For the modern player, Eastwood has done a fine job updating the model for the rest of us. Plus, the axe arrives in a long, narrow hard case that’ll baffle your bandmates when you show up for practice.