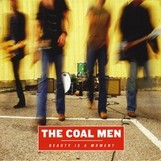 With the addition of Chris Frame (Sun Volt) on guitar and Jen Gunderman (The Jayhawks) on keyboards, the Coal Men have gone from trio to quintet and their second full-length release, Beauty Is A Moment, reflects creative growth that shows no sign of letting up. Composer and guitarist Dave Coleman – who wrote or co-wrote most the disc’s 12 cuts – is the force behind much of what puts the Coal Men into the first rank of roots rock/alt country music.

Coleman writes with the fearless emotional candor that marks the best of Alabama songwriter Will Kimbrough’s work, and the band is just similar enough to the Jayhawks to invite favorable comparison. But despite Coleman’s slight, dismissible vocal resemblance to an earthier, more soulful Jackson Browne, the Coal Men don’t really sound like anyone else. Coleman’s songs have the naturalness of good conversation and unfold with the same freshness. A laconic but literate and expressive lyricist who isn’t afraid to let melody pull an equal share, he paints with fewer strokes than many, yet gets so much out of them. For him and the rest of the Coal Men, beauty is a moment – actually, a series of moments – and there are a wealth of fine ones (“Natural Wonder,” “Cleveland Sky,” “Louisiana”) here. Coleman and Frame’s guitars, Dave Ray’s deep-bucket Levon-Helm-type drumming, the tight but unceremonious competence of the band, and the quality of the songs put the album outside of trends and vogue.

The next big thing always comes and goes, but everything about Beauty Is A Moment indicates a deservedly long and laudable musical life ahead for the Coal Men.

This article originally appeared in VG‘s Sep. ’08 issue. All copyrights are by the author and Vintage Guitar magazine. Unauthorized replication or use is strictly prohibited.