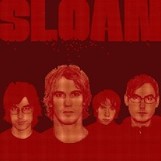 Every song on this latest album by the Canadian quartet Sloan has a great hook; the simple “woo-oows” in “Witch’s Wand” are impossible to forget while “Down In the Basement” speaks like some of Dylan’s best ’60s rock. “All I Am is All You’re Not” is a driven pop tune with a guitar solo that’d make George Harrison proud. Punk influence surfaces on “Emergency 911,” and the two-song set that opens the record is about as perfect as it gets. “Believe” is a stomper with wonderfully loud, blaring guitars, a great vocal, B-3, and a great solo. It’s a perfect song. And if that’s not enough, like many of the songs it segues into another great one in the form of “Cheap Champagne.” The perfect power pop is driven by piano with a lovely, short guitar solo.

Lyrically, the band is much the same; some things may be a bit foreign, but it works. They write separately and on occasion play all instruments themselves on their own songs… much like the Beatles as they neared the end. And while it’s probably not a harbinger, there is a commonality in the music. Anyone who appreciates sophisticated, smart pop/rock will want this disc.