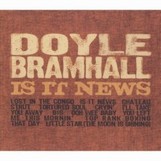 Yes, it is! Any re-lease by Texas blues stalwart Doyle Bramhall is something to get hot and bothered about. But from the first big bang of his bass drum to the last reverberations of smoldering electric guitar, this new album marks Bramhall’s first-ever collection of all-original tunes.

Bramhall needs little introduction. He’s been at the heart of the vibrant Texas blues scene for more than four decades. His teenaged band, the Chessmen, opened for Jimi Hendrix in Dallas in 1968. Moving on to Austin with the Chessmen’s guitarist, Jimmie Lee Vaughan, the duo formed Storm. And when Bramhall later left to start the Nightcrawlers, he now boasted JLV’s baby brother on guitar, SRV.

Any Stevie Ray-ologist knows Bramhall’s name from his several compositions that became integral to SRV’s repertoire – songs like “Change It” and “Lookin’ Out The Window” as well as collaborations including “The House Is Rockin’,” “Wall Of Denial,” and “Tightrope” from In Step and three further tunes from the Vaughan Brothers’ Family Style,, which also featured Bramhall’s drumming.

Yet while he may have been central to the Texas scene, he has not been prolific in recording on his own.

Bramhall released several solo albums over the years, including his 1994 debut Bird Nest On The Ground as well as his blues and R&B ode, Fitchburg Street, from 2003. But with a full slate of original compositions, Is It News is special.

Kicking off with that big bass drum on “Lost In The Congo,” the groove never lets up. Bramhall’s band is tight and right. From the bottom end to Bramhall’s vocals to the guitar frontline, they’re truly inspired.

Denny Freeman and Mike Keller crank out 100 percent Texas-style lead guitarwork, backed by rhythm guitarist and producer C.C. Adcock. Doyle Bramhall, II adds slide guitar on “Tortured Soul” and “I’ll Take You Away,” while none other than Jimmie Vaughan lends his gutsy guitar growl to the closer, “Little Star (The Moon Is Shining).” Penned by a drummer, this is still a rocking guitar album all the way.

Each tune here surprises with tones that you don’t expect. There’s that distinctive heavy kickdrum. And again, there’s that fretwork. The guitars are always on the move, from waves of wah-wah to Leslie-drenched reverb, tremolo-laden slide guitar to good old Austin “sicker is better” sleaze. More than anything – from the fine compositions to the stylish arrangements – it’s the underlying brilliance in the blending of tonalities that astonishes here. This ain’t just your typical blues album.

And while there’s a healthy dose of blues tunes, Bramhall’s written a songbook of roots music. There are dapper uptown shuffles, vibey New Orleans jaunts, classic R&B, Louisiana swamp rock, and, yes, guitar-powered Texas blues. Among the best of the last here is the instrumental jump, “Chateau Strut,” penned by Bramhall and SRV long ago.

Is It News is more than news. It’s a small masterpiece of Texas music.