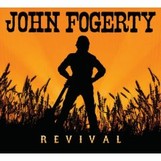 John Fogerty is the rare case of a songsmith who can use the same elements and devices repeatedly, even recycling and permutating earlier licks and melodies, without it ever wearing thin. Sure, it’s familiar; that’s why it feels so good.

Which is not to say that he has nothing new to say. As he proved on “Déjà Vu All Over Again,” he has plenty to say about what’s going on today. In that mode, Revival‘s “Long Dark Night” takes swipes at some guys named George (“in the jungle”), Dick, and Brownie, while “I Can’t Take It No More” may be the rockin’est anti-war song ever, not to mention the shortest (clocking in at barely a minute and a half). “I bet you never saw the National Guard,” the former Army Reservist sings; “your daddy wrote a check and there you are – another fortunate son.”

“Don’t You Wish It Was True” opens the album with loping rhythm guitar, then double-times the chorus, similar to Fogerty’s arrangement of “Midnight Special” with Creedence Clearwater, while “Natural Thing” churns over a beat reminiscent of “Hot Rod Heart.”

Offering up a sincere homage titled “Summer Of Love” (dialing in a Claptonesque “woman tone” and tossing in a snatch of “Sunshine Of Your Love”), Fogerty sounds vital instead of nostalgic. He saves his hottest licks for the rockabilly ride “It Ain’t Right,” which takes a jab at today’s misbehaving starlets (“shaking your booty for the magazine”).

Fogerty light-heartedly immortalizes his former band with “Creedence Song” – singing “You can’t go wrong if you play a little bit of that Creedence song” over a beat that can only be described as “chooglin’.” The old man down the road is fronting a travelin’ band in a bar somewhere between Lodi and Green River.