Home Music The Mother Truckers – Let’s All Go To Bed 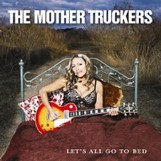 Austin needs another talented guitar player and singer/songwriter like Texas needs more tornadoes, but when the Mother Truckers relocated from the Bay Area they were immediately embraced by the Live Music Capital of the World – less for their considerable chops and pipes than for the fact that they had something original to say with them.

“No Mercy,” from their sophomore effort, Broke, Not Broken, displayed their Gram/Emmylou harmonies over a guitar hook so strong it may never leave your head. But as stated on the group’s MySpace page, their influences range from Emmylou Harris and Hank Williams to AC/DC and Iron Maiden – equal parts twang and crunch.

The singing/songwriting duo at the core of the Truckers is Teal Collins and Josh Zee. Zee’s country-metal licks are on full display on “Dynamite,” which opens the band’s third album, while the Stones’ influence permeates “Streets Of Atlanta.”

Onstage, Collins – daughter of the hippest disc-jockey ever, the late Al “Jazzbeaux” Collins – is known to launch into a full-throated version of “Hot Legs” that Rod The Mod could only aspire to. But she also knows how and when to cool things down, as on the swingy “I’ll Meet You There,” which also features her ukulele strumming, and the beautiful “Soul’s Journey Home,” with Zee summoning subtle Tele bends to complement her vocal.

Call it country-rock, alt, Americana, or anything you like, but these Mothers can play.