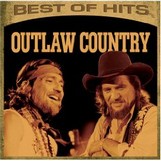 The kind of disc essential to party DJs, Outlaw Country contains many cuts fans of this subgenre will already have. But it’s still worth a nod. Hearing Waylon Jennings’ “Are You Sure Hank Done It This Way” or Johnny Cash “Cocaine Blues” again may turn someone toward Jennings ’70s RCA recordings or Cash’s early Sun releases or American Recordings series on Lost Highway. It may spark exploration into the uneven but worthwhile catalogues of Steve Earle, Travis Tritt, Tanya Tucker, and David Allen Coe; respectably represented here if not at their actual best.

Of course, any collection designated “the very best” raises the question of what songs actually deserve the accolade. The Allman Brothers’ “Ramblin’ Man,” Lynyrd Skynyrd’s “Gimme Three Steps” and Willie Nelson’s “Whiskey River” are hard to argue against. So is the Jennings/Nelson duet “Good Hearted Woman.” But if Hank Jr. is ever going to receive the respect he deserves but seems hell-bent on keeping at arm’s length, then there are better choices than “All My Rowdy Friends Are Coming Over Tonight.” Charlie Daniels, too, has better songs but not many bigger hits than “The South’s Gonna Do It Again” but big sales make a strong case.

Maybe the Marshall Tucker Band’s “Can’t You See” is the collection’s truest pick; a big hit by a working class band at their apex. It’s a perfect bridge between rock and roll and its country cousins and one of the cuts making Outlaw Country worth picking up. –