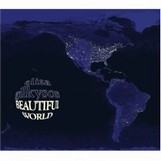 Few folksingers, even those from the original folk revival, have been able to combine social consciousness with musicality as well as Eliza Gilkyson. She merges strong songwriting talent with commanding vocals to create music that has immediate appeal as well as lasting intellectual impact.

Beautiful World is Gilkyson’s first studio release since 2005’s Paradise Hotel. The songs were written starting in ’07, when she began co-hosting a discussion group in Austin. This tune begins with a reference to the Greek mystic Diogenes and draws parallels between ancient times and current politics. In lesser hands this song could degenerate into a didactic rant that would have listeners’ fingers inching for the “skip” button, but Gilkyson’s musical artistry avoids this pitfall. The melody reassures while the words provide more questions than answers.

The best song here is “Dream Lover,” which tells the story of an adult performer from a first-person point of view. Again, the lyrics pose questions instead of presenting conclusions. Gilkyson’s vocals take on a guileless quality that gives her character an extra degree of believability. The song’s upbeat, pile-driving rhythm is reminiscent of some of Warren Zevon’s best tunes.

Produced, engineered, and mastered by longtime collaborator and producer Mark Hallman, Beautiful World employs some of Texas’ best players including David Grissom on electric guitar, Cindy Cashdollar on pedal steel, and Elana James on fiddle. The production is more pop than folk, with a sonic landscape populated by synthesizers and multi-layered instruments. Orchestrations serve to heighten each song’s dramatic impact while not distracting from the tune’s narrative purpose.

While calling this album a masterpiece might seem a bit enthusiastic, there may not be a more accurate description.