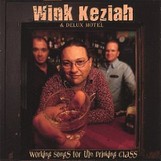 Like Blue Ribbon and Texas Red, some music is best enjoyed in the neon blue of a honky-tonk. Unfortunately, it doesn’t always travel well beyond the barroom. That’s not the case for Wink Keziah & Delux Motel on Working Songs for the Drinking Class.

A self-described “urban hillbilly” from what he calls Charlotte, North Carolina’s “redneck ghetto,” Keziah’s life story contains enough Southern Gothic weirdness to give Flannery O’Connor the vapors. That’s not telling tales. Wink makes no secret of the bumps on the road that led him to become a singing, songwriting son of a gun. If by the fact of his chosen profession he didn’t keep to the straight and narrow, he at least avoided following in some of his family’s muddier footsteps.

No Telecaster-slinging honky-tonker would be worth their salt if they didn’t acknowledge Buck Owens. Wink proudly does just that with his affectionate, spot-on vocal tweak of Buck in the declarative opener “I Can’t Stop.” Delux Motel bring so much fun that when they get to serious matters and mellower tempos in “As Long As It Ain’t Here” and “When Your World Comes Tumbling Down” – two of Working Songs‘ highlights – everyone in earshot is ready and willing to pay attention.

Wink and Mark Stuart of the Bastard Sons of Johnny Cash produced this all-original collection and engineer Mark Williams gets credit for a superbly balanced, ear pleasing mix. Dennis Davis’ all-Tele leads and guest Robin Rogers’ quicksilver harmonica snake around and through Keziah’s vocals at just the right distance with wide-awake support from drummer Phillip Barry and bass player Jim Bolt. This is his first release on Great South and it’s a great place to start catching up with Wink and band. And you don’t even have to wait for Saturday night.