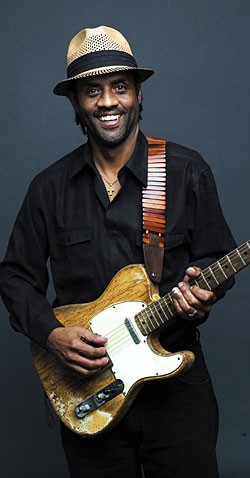 Recent times have been tough for veteran bluesman Kenny Neal. After recently contracting Hepatitis C and undergoing treatment, for the first time in 30 years he was forced to stay off the road. Also, in an eleven-month span, Neal lost his dad, sister, and brother. But those negatives helped create a positive, as he proves on his new album, Let Life Flow.

“To lift my spirit during treatment, I’d pick up the guitar and play a little, and I decided to write. So the CD popped out of the last three years of my life.” Those songs include the soaring soul/gospel of “Fly Away,” an affirmation of life and afterlife that was the result, Neal says, of the deaths in his family. And he also experienced a bit of luck.

“My son, Kenny Jr. and I, put most of the CD together while I was at home. When I started to feel a little better, I started doing a TV show in Palo Alto, California, called ‘The Neals’ Place.’ I’d bring in guests. I needed to do something – I’m not one to sit around. I told one of my guests I was looking for a home for the disc and someone from Blind Pig just happened to hear, and called. Then my buddies started calling, saying, “I’ve got this song…” It all just came together. I’d been through a lot the last three years and it was just like something was watching over me and saying “Okay, we got your back.” It was like magic!”

That magic has been a family affair for most of Neal’s life. His dad, Raful, was known for his harmonica playing with the likes of Buddy and Phil Guy. “From the time I was a baby, I was into the music. I’d crawl up on dad’s knee during rehearsals – we always had great musicians hanging around the house. That was my environment.”

In ’75, Neal joined Buddy Guy and Junior Wells’ band. He was playing bass, but at one point things changed. “I got to Chicago to play with Buddy and Junior, and I saw the folks playing there and thought, ‘Wow! Some of these guys are good, but some are not so good, and they’re going to Europe and everything.’ I thought, ‘I can do that.’ Bells went off in my head. I was an excellent bass player, but after about a year in Chicago, I didn’t want to see the bass! I decided to jump on the wagon and be a front man. I wasn’t too good on guitar, at first, but I had enough guts to try it. And it worked!” 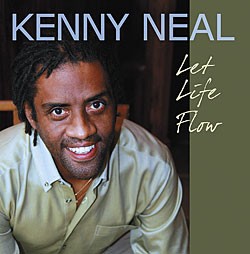 After marrying a Canadian woman, Neal moved his brothers to Canada to play in a band with him. It was, again, a case of intestinal fortitude that got the gigs. “I went to a little place called the Isabella Hotel. They had a blues joint on the top floor and went in and told the manager I could bring in guests and have a house band, and he fell for the story. I didn’t know who I’d bring in. I got back to Louisiana and grabbed my brothers. We bought a van and drove back up. I started calling people like Junior Wells. Then another week, I’d have Big Mama Thornton. The next week, John Lee Hooker. It worked, and at the same time I was learning to play guitar. I guess I just put myself on the spot. I got the job before I had the equipment!”

While he was learning the six-string, Neal’s influences were wide and varied. He points to obvious ones like Muddy Waters and Jimmy Reed, but also cites Louisiana guys like Rudy Richard and James Johnson, who are well-known locally but haven’t had a widespread impact. Anyone who listens to his music also knows there’s a strong gospel and soul influence. “The church was a major thing for us growing up,” he said. “All that gospel stuff you just soaked up. And Otis Redding was always my favorite singer, along with guys like Wilson Pickett and O.V. Wright back in the day.”

Whether onstage or in the studio, Neal’s favorite guitar is a mid-’60s Fender Tele. “Old Betsy; I’ve been playing her the last 30 years, every night. I must have 50 or 60 guitars at home, and I can’t get to ’em – I don’t even touch them. When I go out to work, I’ve gotta take Betsy with me. I’d be lost without her.” He acquired Betsy from a brother-in-law in Canada. “I gave him a ’59 Gibson Melody Maker because I’d fallen in love with his guitar and he didn’t want to sell it. When I pulled that out, it changed his mind. I think Betsy’s a ’65, but all the serial numbers are gone because it’s been there and back.” With a laugh, he adds, “If only that guitar could talk.”

For two decades, his amp of choice has been a Roland Jazz Chorus, but he recently acquired a new amp – the Uptown 33 from King Amplification. “It’s a great amp. It combines the dirty and clean and has a real fat sound.”

As for the future, Neal says after the past three years, he says it’s good to be out playing for folks again. “I just saw the doctor. I’m clear of everything. It’s all gone and I’m back to health, back on the road, and I’m really, really happy about it.”