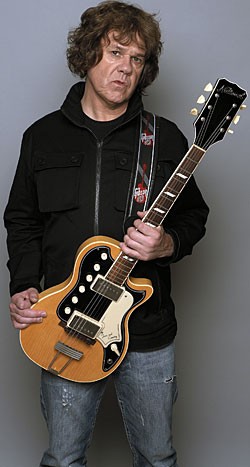 Gary Moore is a true veteran of the music “wars.” His career started in his native Ireland with the band Skid Row in the late ’60s and he was a member of one of rock’s most underrated bands, Thin Lizzy.

Along the way, his solo career has gone through pronounced stages. His new record, Bad For You Baby, includes the usual mix of blues and rock six-string wizardry. For Moore, there’s no secret to his longevity.

“I’ve been through so many phases with various degrees of what they call commercial success,” he said. “But it’s never really been about that for me. I always thought ‘…if you’re a musician, you play, and that’s what you do.’ I always tell young musicians, ‘It doesn’t matter where you play, just play!'”

The new record, he says, was easy to make in part because he’d just come off the road. “If you’ve been touring all year, your energy’s strong, your inspiration’s there. So I was keen to get into the studio.”

Moore wrote most of the songs, but there are some inspired covers, including a blistering version of Al Kooper’s blues ballad, “I Love You More than You’ll Ever Know,” for which inspiration came from the internet. “I was reading about Donny Hathaway online and behind a picture of him, that song was playing. It was beautiful. I look for a song I can bring something to, hopefully, and it’s not going to be a cloned version. So, in this one, I wrote the guitar melody in the start, which goes into the solo at the end. I was also pretty conscious of the vocal, because you can’t really put yourself up against Donny Hathaway.”

Moore’s been in the game long enough to gather famous friends, including the late George Harrison. “I was at a party at Alvin Lee’s house. I was playing and he walked up to me and said ‘That’s the way you should play if you wanna impress me.’ I was playing blues stuff, very tidy, not the heavy rock stuff I was known for. I got to know George, and went to his house on occasion. He said he had a song for me – ‘That Kind of Woman.’ I recorded the vocal at his house and he played guitar and did some backing vocals – that was a great thrill. I loved going to his house because he had all the Beatles guitars there. He’d let me get them down off the wall. He had everything, you know, the painted Strat from Magical Mystery Tour, the Gibson acoustics, the Rickenbacker he played on ‘A Hard Day’s Night.’ It was an amazing room. It was sort of like meeting all your old friends that you saw in the movies when you were a kid.”

Thin Lizzy frontman Phil Lynott was also a good friend. “Phil had a lot of different sides. One was the very romantic, poetic side. The other was quite ruthless. But I was very close to him. We lived together in Dublin, pretty much in abject poverty.”

Moore will forever be linked with original Fleetwood Mac guitarist Peter Green, whom he met early in his career, when Skid Row was getting its first big gigs. He also once owned the ’59 Gibson Les Paul Standard Green used to record early in Fleetwood Mac. He sold the guitar several years ago because of an injury and operation that left him with staggering medical bills (VG, September ’07). “It was a bad experience,” he said. “I didn’t really want to sell it.”

These days, Moore likes Gibson’s Vintage Original Spec Series (VOS) guitars. He plays a VOS Gold Top Les Paul onstage stage and in the studio. He also plays an early-’60s Gibson ES-335 and a Fender Telecaster, and uses seven or eight guitars onstage. His preferred amps are Marshalls, and he has a collection of them.

One question many fans have involves when he’ll next play the U.S. “I’d love to come over, but I never seem to get the offers,” he said. “I spoke to my agent about it and he’s looking into it. I love American audiences. They really bring it out of you.”

Moore has already played 15 countries this year and will hit five more. It’s important that he plays out, even back home when he’s not touring. “We’ll set up and play in the pub,” he said. “It’s perfectly healthy; reminds me why I did it in the first place!” –


This article originally appeared in VG‘s February 2009 issue. All copyrights are by the author and Vintage Guitar magazine. Unauthorized replication or use is strictly prohibited.
Gary Moore – Red House (Hendrix Cover) – Wembley Arena 04