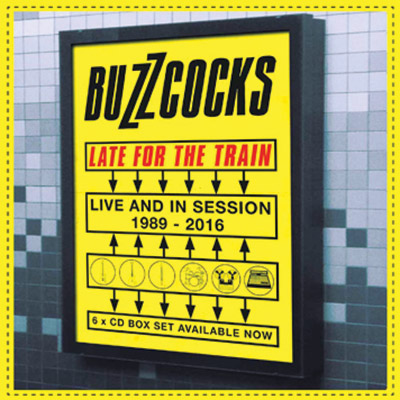 On the punk-rock timeline, some bands haven’t quite received their just acknowledgment. Two Australian bands, The Saints and Radio Birdman, come to mind, as do groups like Flamin’ Groovies and Dr. Feelgood, which though more R&B-oriented, nevertheless influenced punk contemporaries with their presence and energy. Throw U.K.’s Buzzcocks into the mix of bands that have been “punked,” as it were.

Buzzcocks packed it in back in 1981, after three critically (if not commercially) acclaimed solo efforts, but re-formed in ’89 and went on to record six more studio LPs before frontman/lead guitarist Pete Shelley’s death in 2018. Late For The Train is a massive 137-track collection curating live and BBC performances from the band’s second go. Arguably more on the power-pop end of the spectrum, the band’s most infectious classic-era chestnuts are included (“Orgasm Addict,” “What Do I Get?,” and “Ever Fallen In Love” – several times each), along with later songs.

The packaging warrants praise – a sturdy miniature clamshell with 28-page booklet. The decision Buzzcocks noobs will have to make, however, is whether this is a better primer than the classic 1979 compilation, Singles Going Steady, featuring the classic lineup. Completists, on the other hand, will find it an essential capstone. – Dennis Pernu

Mem Shannon – Memphis In The Morning

Too Slim and the Taildraggers