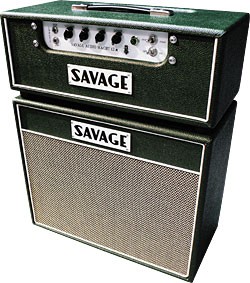 Savage Audio gained a solid reputation for its repair work before moving into amplifier production in 1990. Today, the company builds a full line of studio and stage amps with a list of players that includes Mike McCreedy and Stone Gossard of Pearl Jam, Beck, Peter Buck of R.E.M., and Doyle Bramhall, II.

The Macht series is Savage’s foray into 6V6-based guitar amps. The Macht 12x is its 12-watt, class A amp, with a built-in Studio/Stage attenuator that adjusts power output down to less than half, where Savage says is a “sweet spot.”

The 22-pound, 12-watt Macht 12x head has High and Low inputs, controls for Volume, Tone, Tremolo Speed, Depth, the attenuator switch, and on/off switch. Other features include jacks for 4-, 8-, and 16-ohm speaker outputs and a jack for a tremolo footswitch. The tube layout consists of two JJ 12AX7s, a pair of JJ 6V6s, and a Sovtek 5AR4 rectifier tube, all mounted horizontally. In a nice throwback sort of touch, Savage installs a handy tube diagram inside the cabinet.

One of the first things you notice about the Macht 12 is the size of its output transformer; you don’t normally see one so robust in a 12-watt amp.

The matching cab is made of nine-ply birch, open in back and available with a variety with basketweave grillecloth options. Our cab was equipped with a Celestion Vintage 10, and other format options include 1×15″, 1×12″, or 2×8″ with speakers from Celestion, Jensen, E-V, JBL, Eminence, Mojotone, and Tone Tubby. The amp is also available as a combo, and can be ordered with a variety of coverings. The owner’s manual gives specs, a troubleshooting guide, and even suggestions for preamp tube substitutions.

With a Fender Telecaster, the amp went from clean, sweet, brown-Deluxe-like tone to robust tweed Deluxe as the Volume knob was turned to its upper regions. And for the record, comparing the Macht 12 to a Deluxe is somewhat unfair not only because of its more robust transformers, but its Tone control is full-range, not of the treble-roll-off variety.

The amp exhibits a wonderful compression that is especially evident when playing a Strat on the neck pickup or a humbucker-equipped guitar. The compression was not the stompbox variety either, but more high-end studio type. Never squashing, but always beautifully framing the sound.

Fully cranked, the Macht 12x really shows its teeth, producing a tight, gritty overdrive that no pedal could possibly provide – that’s what cranked 6V6s do! The Celestion Vintage 10, of course, adds its own flavor of high-cholesterol midrange to every note. If you desire more clarity while staying crunchy, the optional Celestion G-12H-30 or an Alnico Blue might suit you better than the Vintage 10. 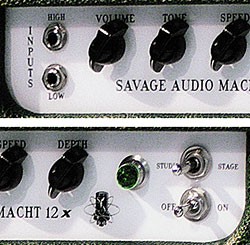 The Studio/Stage settings are extremely well-conceived. In the low-output Studio mode, the amp retains its vibe, sacrificing only a slight bit of treble response, which is easily remedied with a touch of the Tone knob. As the amp is dimed in either mode, it becomes brighter, necessitating rolling back the Tone control. And it certainly is no surprise that the amp is pedal-friendly. From Zen Drives to modeling pedals, it accepts all with open arms. Even a pummeling from a cranked ’70s MXR Dynacomp produced smooth, splat-free overdrive.

Speaking of effects, the Macht 12x has a built-in Tremolo circuit reminiscent of that aboard a blackface Fender. But unlike its Fullerton forefather, the Macht 12x’s tremolo can be dialed from a very controllable seasick slow to insanely fast. It is superbly smooth, and requires only a very small drop in overall level when engaged.

Overall, the Macht 12x is a very toneful, well-built, well-thought-out amp, and its built-in attenuator makes it a godsend for those who strive for good tone but are always being told to turn down. Kudos also for making it a head/cab; separating the tubes from the speakers is one of the smartest things one can do to prolong tube life. And it gives the player the option of sitting in a studio control room with the head, while the cab sits down the hall. Though it may not offer the scooped mids of a blackface Fender or the glassy highs of a Vox AC30, the Macht 12x produces robust tones for 6V6 lovers looking for sweeter midrange and less twang.