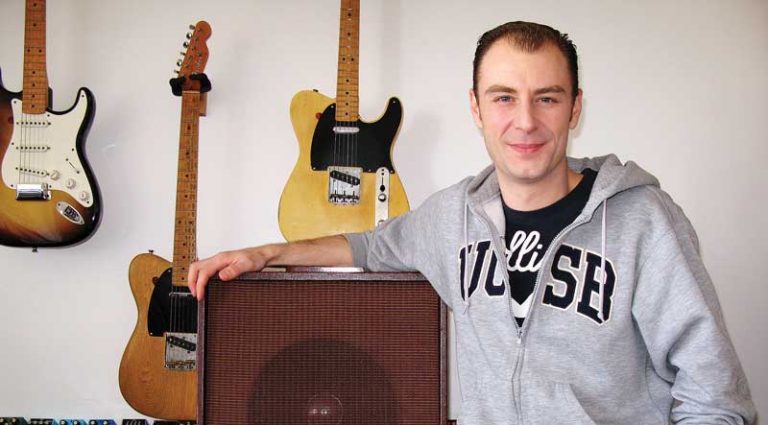 If restoring dusty, neglected old tube amps built more than half a century ago isn’t challenging enough, restoring amps with delicate built-in tape-echo units, no fixed schematic, and quirky hand-wired “rat’s nest” circuitry should drive any level-headed tech insane. Regardless, Frank Roy of Toronto, Ontario, says “Bring ’em on!”
Roy, a trained IT professional – and Telecaster player – has been restoring vintage electronics since the late ’80s. Lately, though, he has made a specialty of bringing rare and highly valued Ray Butts EchoSonic amplifiers back to life, both electronically and cosmetically.

“Ray was a genius of our time,” Roy enthuses. “He helped pioneer the sound that eventually led to the next 50 years of mainstream rock music.” History maker or not, Butts’ amplifiers offer plenty to drive the less well-grounded repairman batty. “The amps run very hot, so tube failures are somewhat common, and some power transformers have failed… [and] the tape transport needs constant maintenance. The motor bearings and wheels need to be oiled, the tape loop needs to be replaced regularly, and the tape heads and contact points need to be demagnetized from having been in contact with the magnetic tape. As well, the pinch rollers and idler wheels almost always need to be replaced as the rubber hardens and develops wear over time…” In other words, he has his hand full!
To compound matters, however, learning the art of EchoSonic restoration isn’t simply a matter of boning up on Butts’ design – or, the question would be, which design? “Each EchoSonic is almost unique, as Ray would often work with the customer to achieve, if desired, a specific sound,” says Roy. “Over time, we see alterations such as slight variations in some component values, changes in transformer orientation, tape-head mounting modifications, adjustments to the tape head circuitry… But [EchoSonic amps] are exceedingly rare, as only a dozen or so of them still exist today from the 68 ever built, and I have not seen them all.”

Despite being a seemingly simple amplifier based around a pair of 6L6 output tubes (6V6s in some early models), Roy notes that the EchoSonic was never just a generic amp with a tape-echo tacked on, and there are several quirks to Butts’ circuit. The chassis carries 11 tubes, six of which are dual-function, and the deceptively simple single tone control (marked “Bass|Treble”), rather than being the passive treble-bleed network familiar from most early amps, taps an interactive Baxandall-style tone stack that genuinely emphasizes bass when turned left, and treble when turned right. The wiring itself is extremely meticulous, too, entirely point-to-point, and includes top-quality components throughout, though to the uninitiated it can look like a tangled web.

In addition to the amplifier circuitry, the EchoSonic’s tape delay mechanism was a minor electromechanical wonder of its day, though the application here does present its own difficulties. “The practicality of having a magnetic tape echo device built into such a compact medium had inherent space limitations, which affects the device. Magnetic tape starts to degrade after a certain amount of use, and in the case of a tape loop, the smaller it is, the faster it wears out.” Squeezing all this echo into such a small space required a short loop, and therefore, frequent tape changes.

So, such thorough detailing and repair of an ailing EchoSonic constitutes plenty of hassle just to get a dusty old tube-powered suitcase rolling again – but look at it as breathing new life into the original sound of rock and roll, and it is clearly worth the effort.