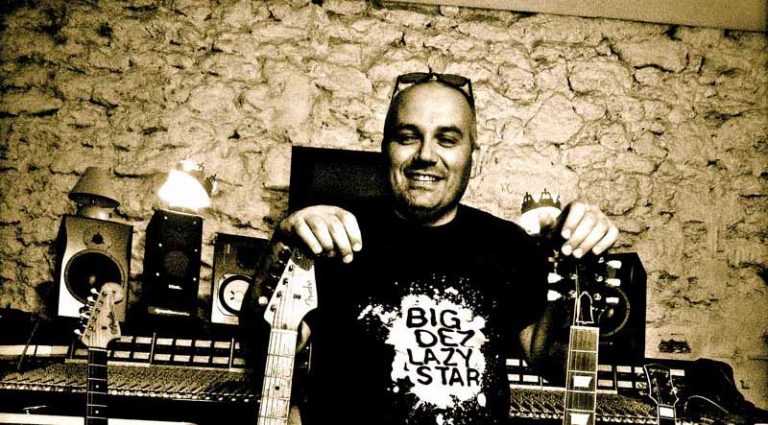 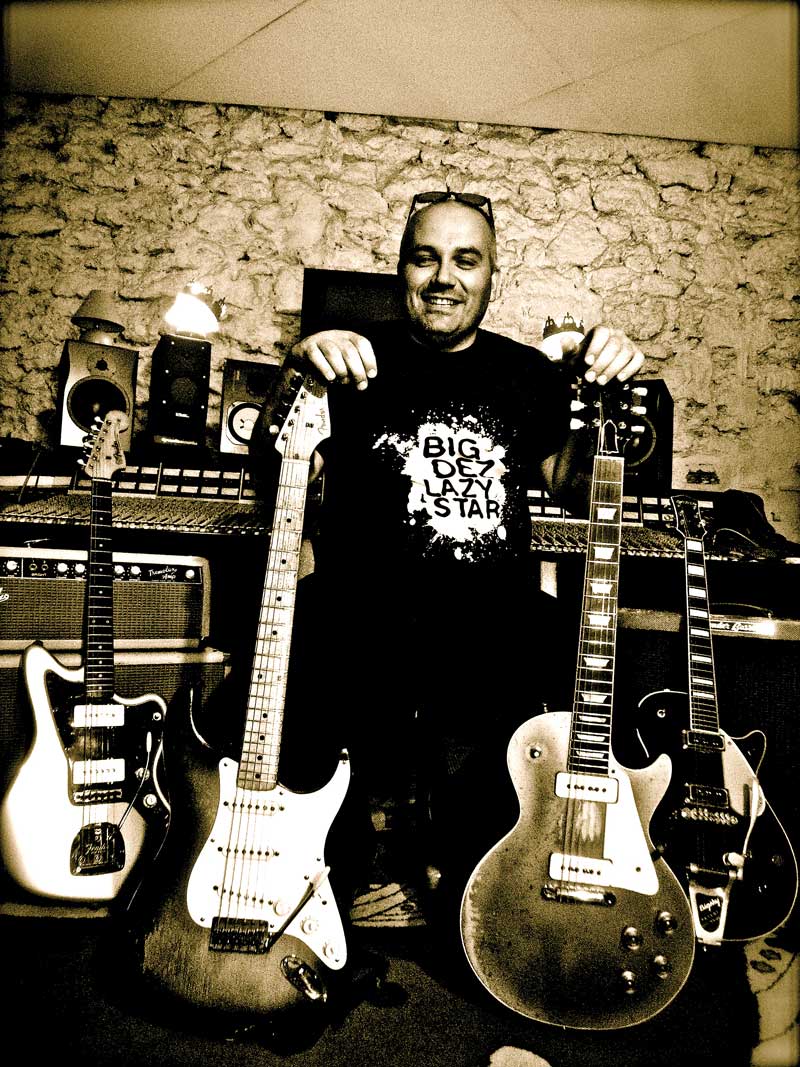 6’2″/300-pound Phil “Big Dez” Fernandez is an international emissary of the blues. The French-born son of a Bosnian mother and Spanish father is a favorite at European blues clubs and festivals, and Lazy Star is the latest of five CDs that have helped him build an ever-growing fan base in the United States. The U.S. is one of several far-flung countries through which the blues express known as Big Dez will roll through in 2012.

The label “international” fits you personally as well as professionally, doesn’t it?
Well, I was born in France, but my wife is Dutch, my kid is Dutch, and my home is in Amsterdam. In Paris, I stay at my mother’s house, where all my guitars are. It’s only three hours from Amsterdam by train, so it’s like nothing.

When did your interest in blues begin?
When I was a kid, I discovered the blues from all these English people – the Rolling Stones, Eric Clapton, Jeff Beck. When I was 13 and starting to play guitar, I discovered my heroes, B.B. King, Freddie King, and Albert King. All the roots were from the United States. I saw B.B. King the first time when I was 15, and fell in love even more with African-American blues.

You’ve spent a lot of time in Chicago and Texas, Austin in particular. When did you first visit the U. S.?
Twelve years ago, I went to visit and play with some French friends. Then I got the idea to bring the band and record in the States. I’ve always thought that if you are in America and want to open a French restaurant, you must go to France and study. If you play blues and rock-and-roll, you have to go to the United States. I like America a lot. All the music I like is from there. The three past albums were made in Austin and in Jamestown, Missouri.
Do the French differ from Americans in their definition of what is “real” blues?
In France they want to say, “This is a blues band, this is a blues/rock band, etc.” For me, it doesn’t matter, blues is everywhere. I have always enjoyed African-American music like blues and rock-and-roll from Chuck Berry to James Brown. I’ve been through several jobs and about 10 years ago decided to become a professional musician. It’s not so easy, especially if you want to play only blues and rock.

Is there more opportunity to make a living playing music in Europe than there is in the U.S.?
Yes. In France, if you can prove you worked the whole year and you got gigs and you paid taxes, then they give you a subsidy. Every time I explain this to the American musicians, they don’t believe me. They say ‘What? You play and they give you money!?’ I would love to make more money, but I’m not complaining. My father worked 40 years in construction, so I know there are some really heavy jobs.
Did your parents support your decision to become a professional musician?
They were kind of worried because I moved to Austin and quit my job. I was working at a home-improvement store and playing on weekends, and I was really tired. Then I went to America for three months or so ’til my visa was up. I went back to France and that first year they helped me a lot.

You’ve managed to gather an impressive collection of guitars and amps in a short time.
Since I quit drinking and smoking, all the money I used to spend drinking and going out, I’m spending on guitars. I was a Fender Strat guy forever, but since the last CD, I have been turning more to Gibson and my Les Paul. I bought my first Strat in Chicago in ’97 when I was 21. I went for holiday and I spent all my money on one guitar – $3,000 for a ’61 Strat. I used that guitar a lot and then quit for many years. On the last CD, I used a ’57 sunburst Strat, a sunburst ’61 Strat, and a ’53 Les Paul goldtop with P-90s I bought a few months ago. 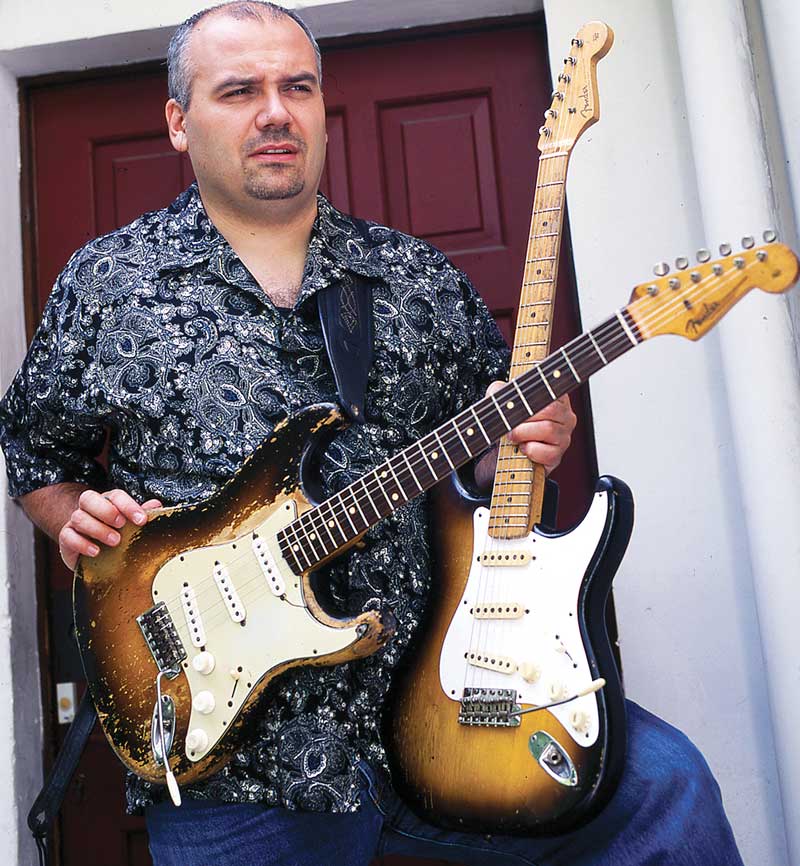 What makes you decide when to use a particular guitar?
If you spend a lot of time with the Strat, you can get almost every sound you want. Not so with the Les Paul. I’m playing a lot more rhythm on the new CD, so I’m playing the Les Paul and a ’56 Les Paul Junior with a P-90. I run a jam session in Paris every Sunday and sometimes I bring my ’57 Strat or my ’61 Strat or whatever and my friends say, ‘You’re crazy!’ I say to leave it under the bed or to just put it on the wall is a shame. I want to play these guitars! On Lazy Star, I used almost all of the guitars in my collection.
Is it easier than it used to be to get good American–made guitars in Europe?
I’ve never bought a guitar in Europe. There are a lot of good guitars here, especially in Germany, but they’re very expensive. I’m really a Fender and Gibson guy. I’m not a jazz manouche [Gypsy jazz or Gypsy swing] player, but I know there are good guitars for jazz manouche here, like Selmer like Django Reinhardt used to play. Vincenzo Jacobacci also used to make a really good guitar for jazz and blues.

Can you tell by listening if a musician is American or European?
Not anymore. Not in 2012. But African-American blues singers are still unique.
What qualities do you find more of in American musicians than those from Europe?
Well, maybe more courage to keep doing this as a main job, because in the U.S. it’s really tough to make a living as a musician.

What about European musicians versus American musicians?
We cook better!